It’s the early portion of a new week, which gives us another RAW In A Nutshell. This week, the theme is “recovering from The Horror Show [1]“.

That theme should be rather self-explanatory. Sure, some fans were entirely pleased with the show from Sunday [1].

Most, however, were not entirely satisfied. Sure, there were a few matches of better than average quality.

However, there was the bizarre ending to the RAW Women’s Championship match, and of course, the bizarre and panned swamp fight [2].

So yes, this week’s RAW theme is all about recovering from The Horror Show [3]. Possibly a bit of SummerSlam hype, too.

And, in case you were worried, we have a main event of Randy Orton versus The Big Show. So, there’s that to look forward to, I guess?

Let’s start our reovery from The Horror Show…

I shall take the quirky six man tag match for the win. 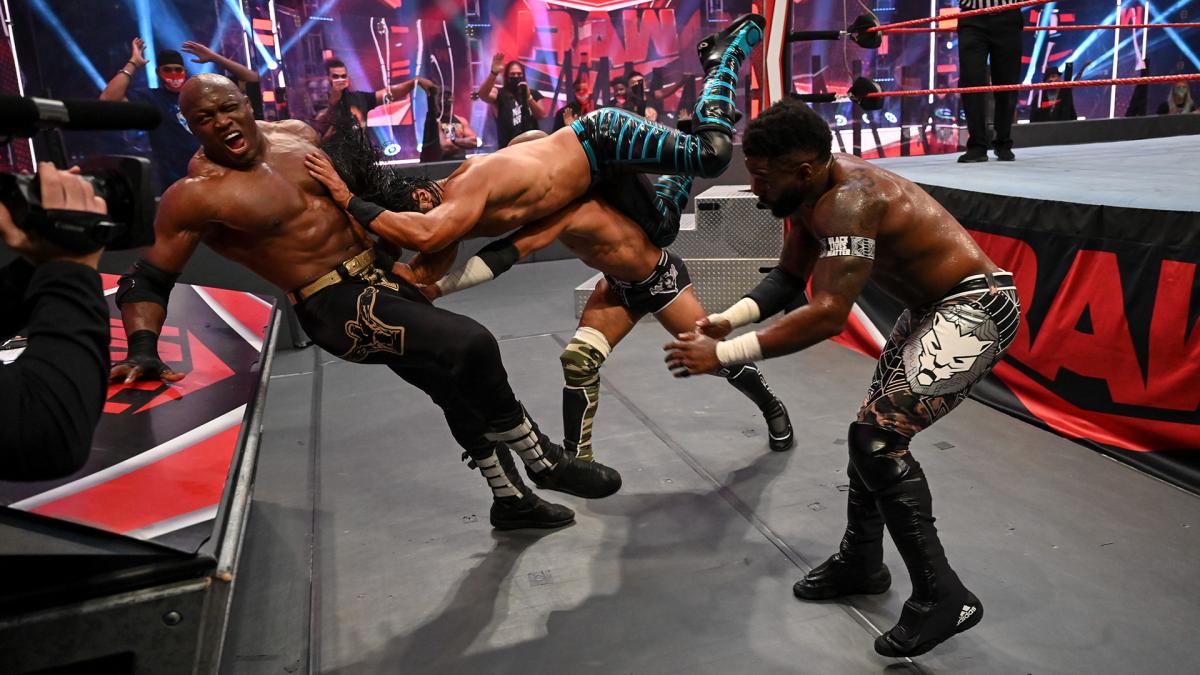 I call it quirky because, well, one side was essentially all cruiserweight eligible Superstars, and the other team was all heavyweights.

Not that size matters, but usually there’s a better mix.

Ruby Riott and Peyton Royce. The upside to this one was that Riott got herself another win. 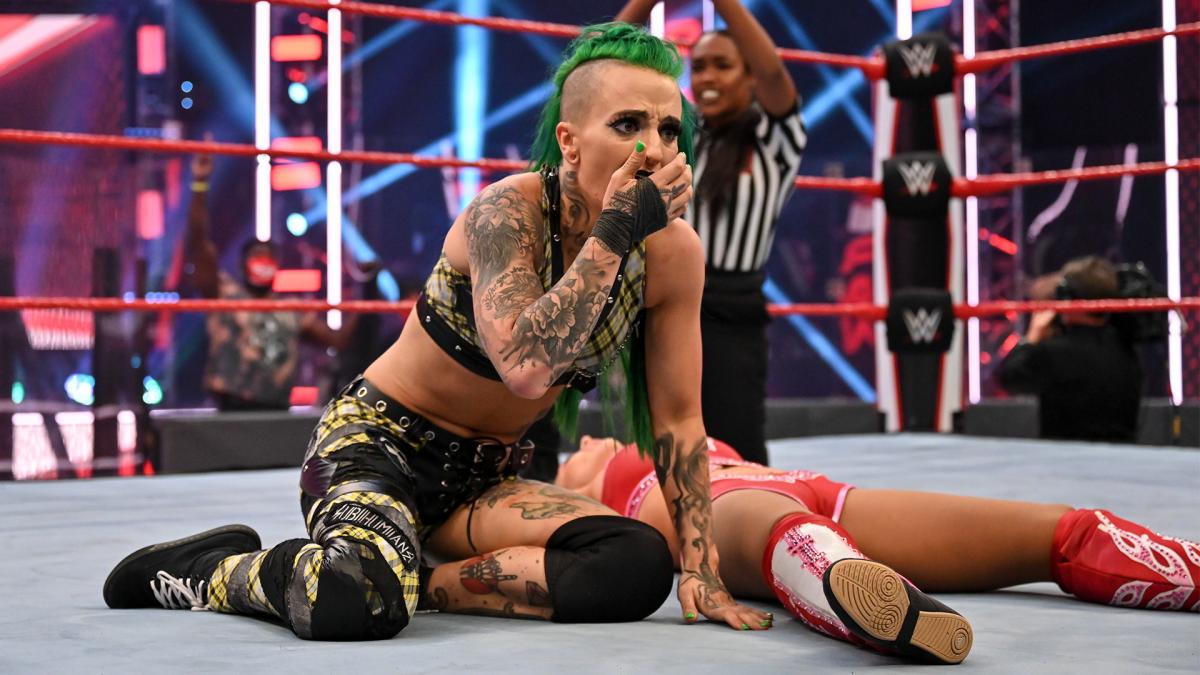 Going with two…as I seem to be doing a bit.

One, Randy Orton. Strong on the mic, strong in the ring. 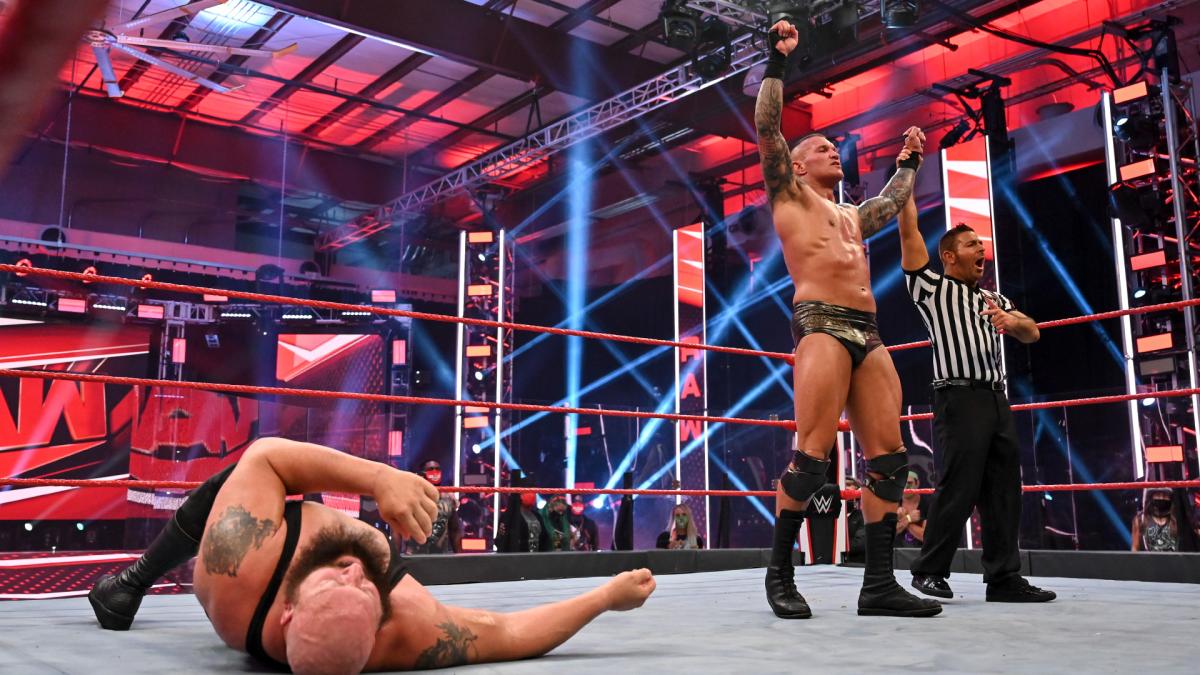 If you have anyone other than Randy Orton as your wrestler of the year at the end of 2020 then your opinion is immediately invalidated. #RAW [4] #WWE [5]

If the rumors of Orton going after Drew McIntyre for his title at SummerSlam are true…it wouldn’t be shocking to see Orton wear gold again soon.

Two, Mustafa Ali. Have not seen Ali in a while, and we seemingly won’t see the hacker story line come to fruition…but he had a nice return. 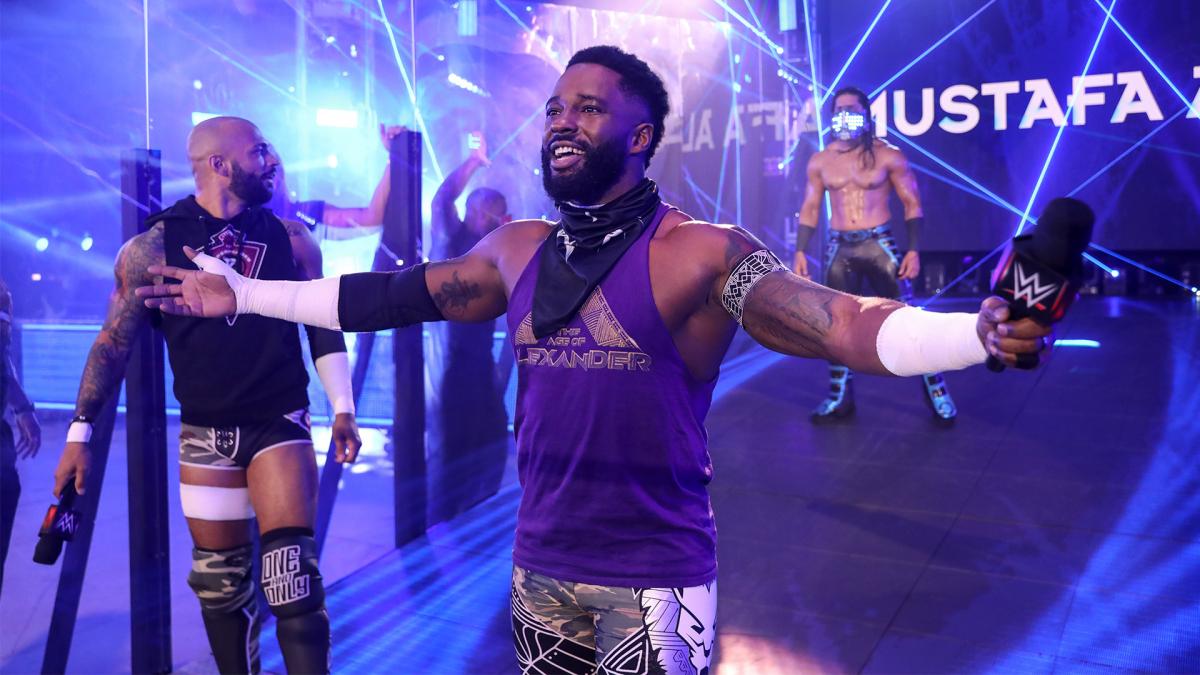 Honestly nothing grabbed me as a major spot. 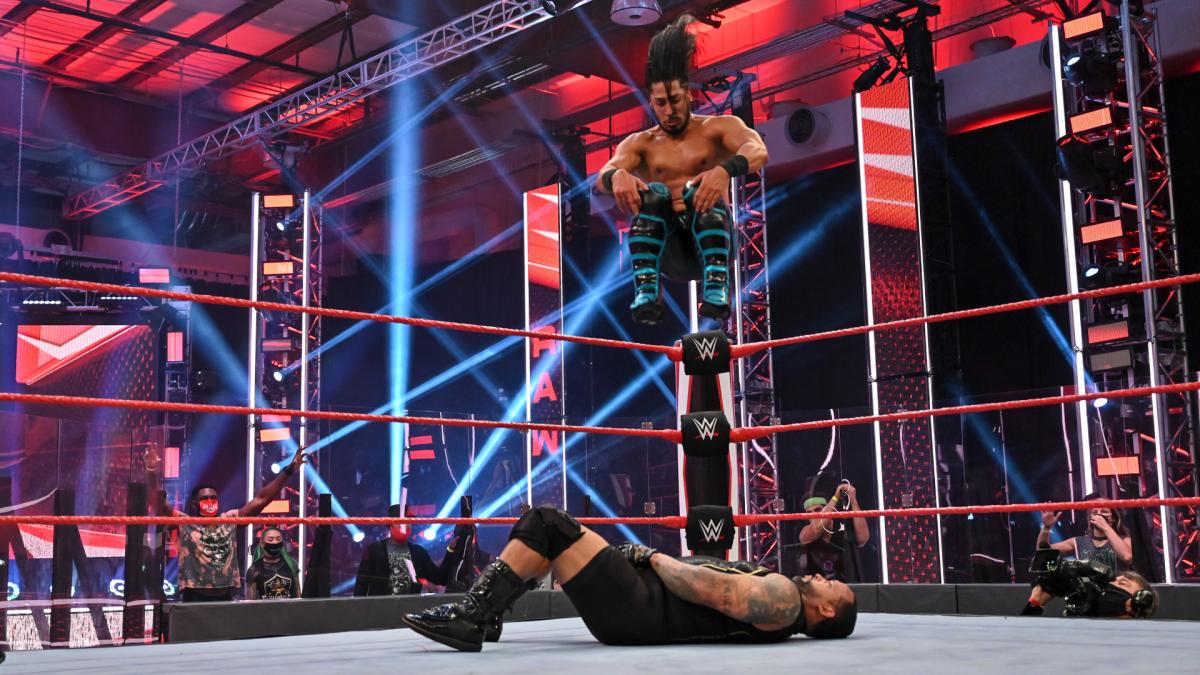 I could say that Montez Ford continues to impress with his incredible flying (he does).

But…nothing screams spot of the night. 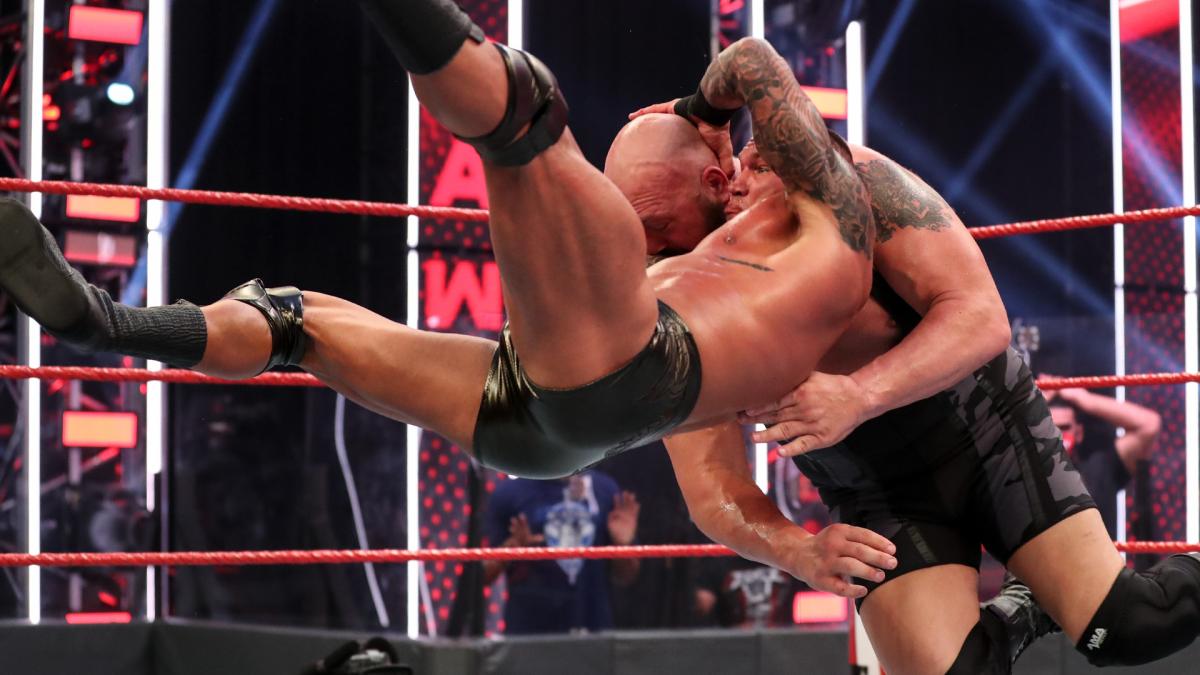 I am going with Peyton Royce here. 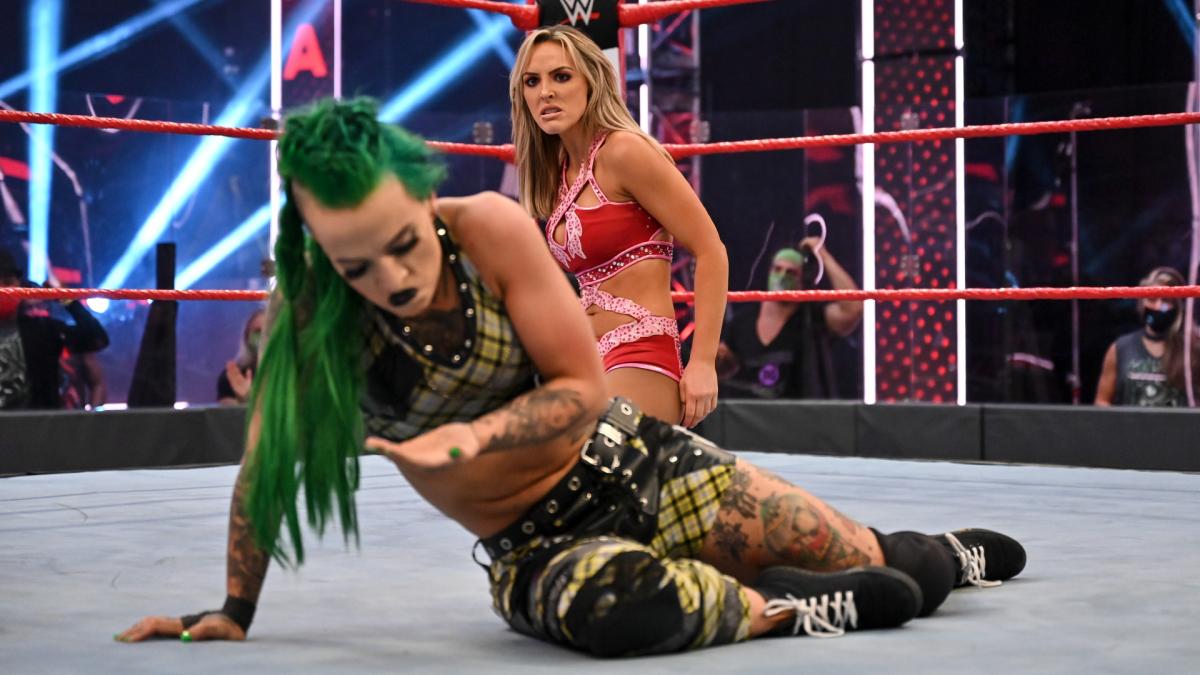 And, stating the obvious, but with Billie Kaye nowhere to be seen, one has to wonder if Kaye isn’t among those testing positive for coronavirus. Hopefully that’s not the case.

Really nothing to slide in here.

WWE missed a chance to tie in Shayna Baszler with Shark Week! How did they drop that ball?! 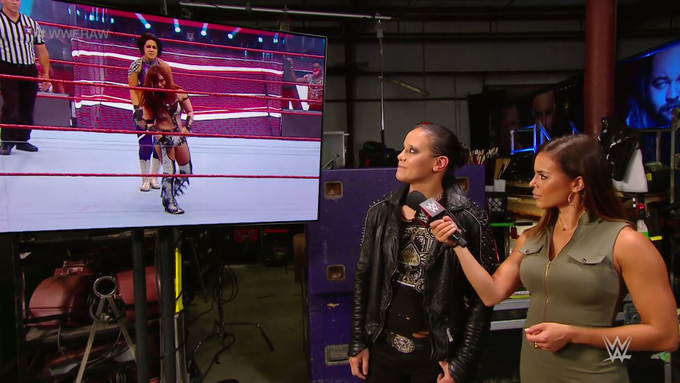 Seriously, I liked the promo for Baszler during the Bayley/Sane match. Makes me wonder if we don’t see Baszler interfere in the Banks/Asuka match…which could give us a triple threat match for the RAW Women’s Championship at SummerSlam.

Of course, I’d say if that is the direction they go with, that WWE wasted the Money In The Bank briefcase with Asuka (not because she was bad, but because why give her such a short reign).

Truth with the frying pan to protect himself from MVP and Lashley. Sadly, he needed eyes in the back of his head more.

Well, we got to see Stephanie McMahon, sort of. I think this is the first time since the Hunter Appreciate Night, if memory serves. 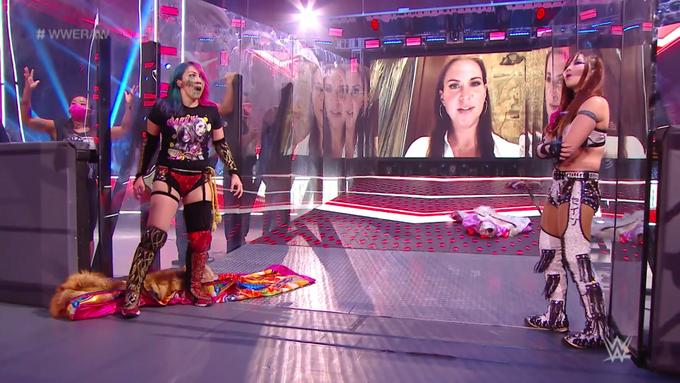 Stephanie showed up on the Tron, to announce that we’d have a match next week to determine the true RAW Women’s Champion. I didn’t especially like that Sasha got to hold the gold still…but let’s discuss.

Per the rules, there will be a winner and a loser. Whoever loses is not the champ.

That seems obvious enough, but that means in this case, the title can change hands via DQ or countout…kinda?

Now, thinking this one through…we’ve heard a Banks/Bayley blowup coming, right? Before the tag title win and all, it had been teased a time or two.

So what if WWE put the belt on Banks, only to have Bayley cost her the gold and ignite the feud? Maybe a reach, but it’s all I can come up with now.

Otherwise, it was kind of like…McMahon just rewarded Banks and punished Asuka for the cheating done at Extreme Rules.

In other news, while the babyface trio won…it was just so odd to see Ricochet, Cedric Alexander and Mustafa Ali team up against Bobby Lashley, MVP and new 24/7 Champion Shelton Benjamin. 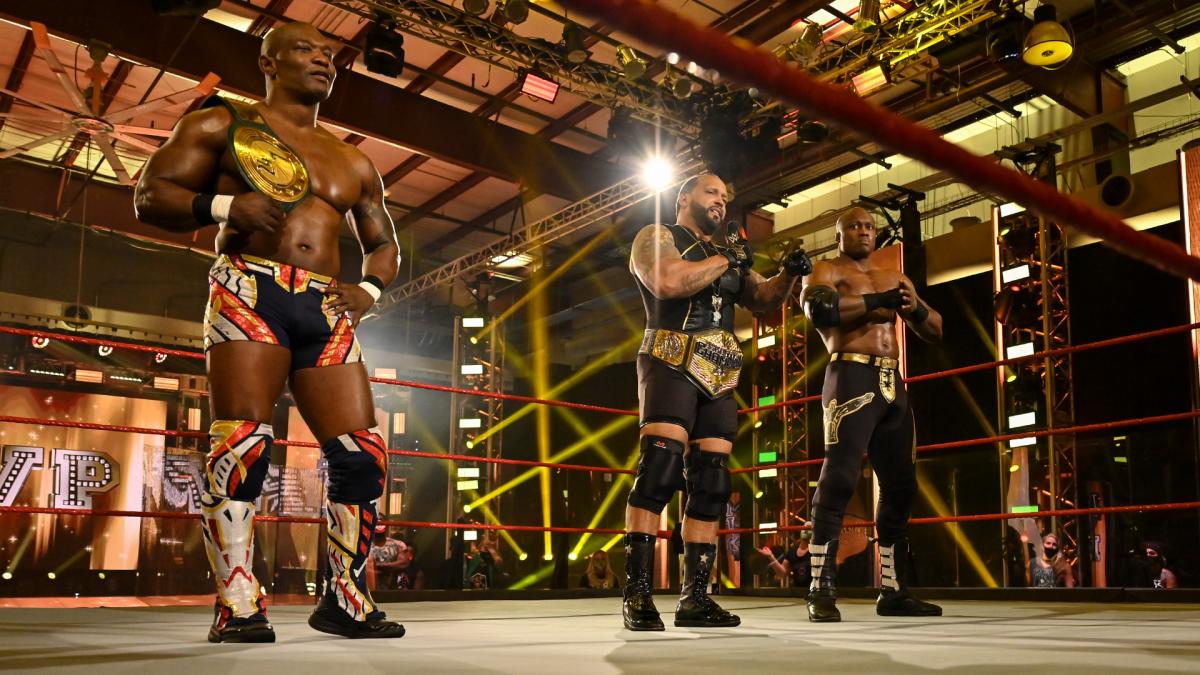 Why odd? Well, the babyfaces all have, or nearly could have, competed for the cruiserweight division. They were opposed by three legit heavyweights.

Did not love the direction of Asuka and Sasha Banks. I may feel a little different once things unfold next week, but for now, it really does feel like Asuka got screwed more than anything.

The show opened with a strong match. 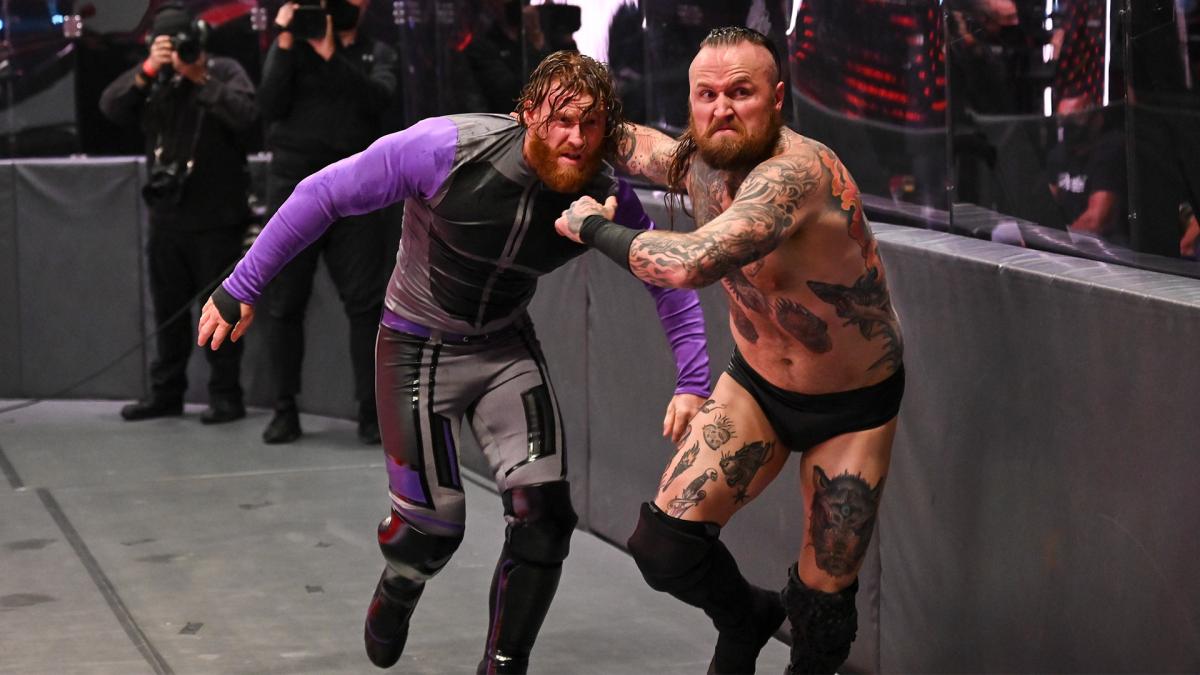 Mustafa Ali is back, sans hacker. He seems like he could get a significant push once again, as he was dropped into play against MVP and Bobby Lashley.

This was fun too…

Well, that was an interesting RAW.

The reports of the late rewrites makes me wonder what RAW could have been (and if those would have actually been better or worse).

Though, here’s one fan with a crazy and not bad idea…I mean, if all they keep doing is last minute re-writes, why not take some weeks off, give us this and go from there?

Though, like I said, it wasn’t a terrible RAW, and here’s one way to spin it:

Kind of a back-to-basics #Raw [8] tonight. Some great in-ring action and solid storyline progression. Very focused. More of this, please. 👍

While on one hand it was nice to see Stephanie again…it’s also kind of like…why bother now? She’s largely been off air this entire time, and it’s not exactly super-challenging or demanding to be on FaceTime or Zoom for a few minutes here and there to record stuff.

We didn’t yet jump into SummerSlam hype. Sure, some started to discuss it, but no matches got set up yet.