Darren Till understands that Israel Adesanya is a very talented fighter. But, after facing Robert Whittaker, he suspects the champ would be an easier fight.

Israel Adesanya took out Robert Whittaker last October. But, following his loss to Whittaker on Saturday, Darren Till opined he’d likely have an easier time fighting the champ. 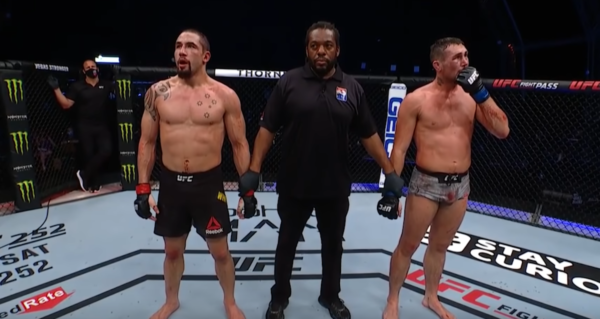 Till outlines why he believes fighting Adesanya would likely be “easier”

The former welterweight contender faced Whittaker in the main event of UFC Fight Island 3 on Saturday, and lost the fight via unanimous decision.

Early on, it looked like Till would emerge as the victory, after he floored Whittaker with a booming elbow in round one. The former middleweight champ managed to recover, however, and he proceeded to drop Till in round two.

The remainder of the fight was fairly close, however, Whittaker scored points with his wrestling as well as his striking, and received the UD nod.

Well, after the bout, Adesanya tweeted out this praise for Till.

I still wanna fight Till one day.
His striking is beautiful.
Stay up Darren!

I still wanna fight Till one day.
His striking is beautiful.
Stay up Darren!
🥺

The charismatic Till was asked to respond to Adesanya’s praise while talking to the media afterward. Till made it clear that he respects the champ’s abilities, but he also argued he’d have an easier time fighting Adesanya than Whittaker (quotes via MMA Junkie).

“I’m going to have to lay off him for a while,” Till said. “All I do is scream at him in Instagram messages. I’ve got a lot of respect for Israel.

I think he’s a great fight. But you know what, this is no disrespect for him, but I think he’s probably an easier fight for me than Rob because we’d probably have a great striking battle.

“Rob’s a bit different because he mixes it up. Israel’s the champ, he’s a great MMA fighter, but he’s a pure striker. I think we’d have a great fight.

Rob mixed it up a little bit. He’s wild. … (Adesanya and I are) going to fight. I’ll come back, I’ll knock someone out, and we’ll fight.”

Now, sure, as noted above, Adesanya did take out Whittaker in the second round when they fought last year. But, styles make fights, so, one can understand why Till feels this way.

Once Whittaker started threatening Till with the takedowns, this almost certainly gave him pause for thought, in terms of his striking tactics. Would Adesanya come looking for takedowns against Till? Probably not.

Now, none of this means, necessarily, that Adesanya wouldn’t also put away Till. But, Till isn’t short on confidence when it comes to his stand-up game, thus the comments above.

You also have to wonder how Whittaker’s fight with Adesanya might have played out, if ‘The Reaper’ had turned to his wrestling earlier on in the bout.