Calvin Kattar didn't call out Alexander Volkanovski after his big win at UFC Fight Island 1, but he's pretty confident he can end the champ's reign.

Calvin Kattar continued his march into title contention at UFC Fight Island 1 on Wednesday, and while ‘The Boston Finisher’ didn’t call out Alexander Volkanovski, he clearly likes his chances against the champ. 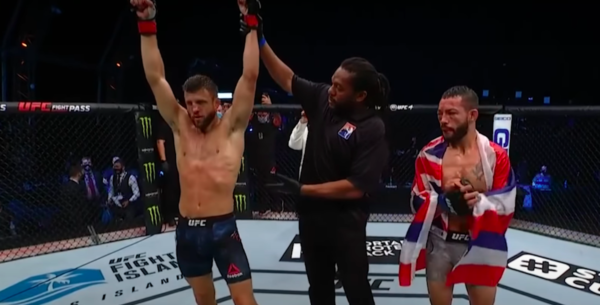 After five rounds, Kattar had outstruck Ige by a 107 to 87 margin, and he received the decision nod.

Well, after the entertaining fight, Kattar was asked about his place in the title shot picture. The 32-year-old relayed that he doesn’t need to call Volkanovski out, as the champ should be well aware of who he is (quotes via MMA Junkie).

Where I’m from, we don’t really talk about stuff too much. We go out and prove. We earn it. Here, (shot-calling) is not really the business model, so it’s a little bit of an adjustment for me.

I go out. I fight and I try to earn every opportunity in front of me. The champ should see that. He’s saying he wants contenders and you’re not going to find one more ready than myself.”

Not surprisingly, Kattar was also asked for his thoughts on how he’d do against Volkanovski, who has yet to lose in the UFC.

“I see it (going well),” Kattar said. “He’s a little shorter for the division. You see how I match up with the shorter guys.

I like my reach. But then again, he did well with Max who’s another taller guy in the division. He’s a tough kid. Everybody in the top 10 (or) top five is going to be tough. I just think I present other qualities that will get the job done.

Yeah, tough kid. I see myself beating everybody they put in there with me. The champ is no different.”

What could be next for Kattar?

It would certainly be interesting to see how Kattar would do against Volkanovski. As Kattar noted, he would have the reach and height advantage over the champ, but that’s nothing new for the 5’6 tall Volkanovski.

Would he present challenges that Max Holloway didn’t? It’s a good question.

But, at the end of the day, Kattar will very likely need to score another win before he’s tabled a championship fight. Prior to UFC Fight Island 1 he was ranked #6 and Ige was #10.

So, Kattar has the likes of Zabit Magomedsharipov ahead of him, who beat Kattar last year, as well as Chan Sung Jung, Brian Ortega and Yair Rodriguez.