If Conor McGregor is planning to return to the Octagon for another shot at the title, Dan Hooker says the star will need to get in line.

Dan Hooker plans to take another big step towards the UFC’s lightweight title today, by defeating Dustin Poirier. In fact, ‘The Hangman’ has let the promotion know if he wins, and Conor McGregor gets tapped for a title shot, he’s going to kick up a “fuss”. 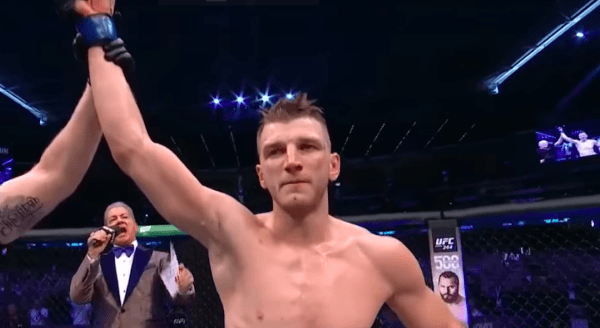 Hooker says McGregor will need to get in line

The New Zealand fighter has been booked to fight Poirier today in the headliner of UFC Vegas 4, on account of a three fight winning streak. Since Hooker was stopped by Edson Barboza in 2018, the dangerous fight has defeated James Vick, Al Iaquinta and most recently, Paul Felder.

Well, heading into today’s event, Hooker is sitting in the #5 ranking of the UFC’s lightweight division. Poirier, on the other hand, is #3.

Recently Hooker spoke with MMA Fighting, and the 30-year-old was asked about the possibility of McGregor returning to the UFC, and doing so for a title shot. The dangerous fighter made it clear that if he wins today, he believes he’ll be next in line, not McGregor.

“That fight is set, Gaethje and Khabib – that fight is going to happen in September, and I’m the next guy in line,” Hooker said.

“That will be a four fight streak over the No. 3, No. 6, No. 6 and another ranked fighter. Those are top-ranked guys.

“The next guy in line would be Conor McGregor, who looking back at it now, has a win over the No. 12 [ranked fighter] in the division.

So when you compare resumes, it would be pretty difficult to hand him a title shot over me without me kicking up a fuss.”

Well, if you like your matchmaking done with meritocratic principles, then you might agree with Hooker here. McGregor is coming off a win over Donald Cerrone, who is currently ranked #11.

Prior to that, McGregor was submitted by the champ, Khabib Nurmagomedov. So, Hooker’s not the only person to argue that McGregor needs to score another key win,  before fighting for the belt again.

But, after McGregor beat ‘Cowboy’, Dan White relayed that the star had earned a title shot. So, if McGregor does want to come back, and fight the winner of Khabib versus Justin Gaethje, it’s hard to imagine the UFC passing.

If McGregor remains on the sidelines, however, and if Hooker beats Poirier today, he very well could be tapped to fight for the belt. The only fighters ranked ahead of him currently are McGregor, Poirier, Gaethje and Tony Ferguson.

UFC Vegas 4 will be hosted by the Apex Facility in Las Vegas, Nevada.

Report: HBO Max Series About Gotham PD Will Explain How the City “Became Corrupt and Infested with Criminals”