Mike Perry won't turn 29 until later this year, but the man who will battle him tomorrow, Mickey Gall, believes "Platinum's" best days could be already behind him.

It didn’t take Mike Perry long to make a big splash in the UFC. But, as “Platinum” gets set to compete in his 13th bout with the promotion, Mickey Gall thinks Perry’s on the slide. 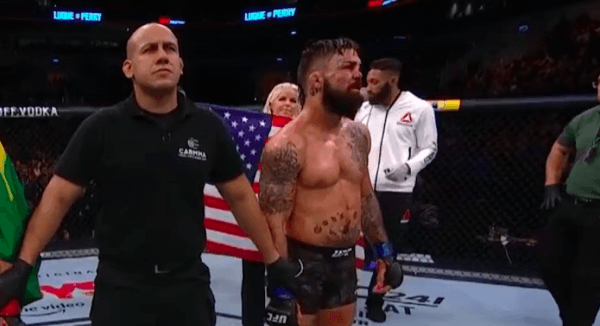 The 28-year-old Gall will face Perry tomorrow night in the co-headliner of UFC Vegas 4. As the bout approaches, Perry, who is also 28, is coming off back-to-back losses to Vicente Luque and Geoff Neal.

The hard-hitting welterweight worked his way to a decision win over Alex Oliveira before that. But, in his bout prior, Perry was submitted by Donald Cerrone.

Well, while talking to the media in advance of tomorrow’s card, Gall had this to say about Perry’s skills (quotes via MMA Junkie).

“I’m going to be prepared for the best Mike Perry, but if I really think about it, I think he’s been regressing,” Gall said.

“I know I’m getting a lot better and I think he’s on a downward slide, but I’ve been training hard, I’m peaking, and I’m ready for the best Mike Perry that’s ever been.”

“In my film study you can see that (he’s regressing),” Gall explained. “I think Mike is probably an insecure dude, probably had a tough life coming up.

I don’t know if he’s handling everything super well right now, but again, who knows. I don’t even want to speculate too much because it doesn’t matter. I know the hand I got, I know what I bring to the table, and I’m super, super confident.”

Is Gall onto something here?

As noted above, Perry (13-6) did defeat the always tough, Alex Oliveira just last year. Before he lost to Cerrone, ‘Platinum’ beat the ridiculously rugged, Paul Felder by split decision. Felder did, however, move up a weight class for that fight.

Neal is one of the faster-rising commodities in the welterweight division, as he’s won seven straight, and Perry battled the super-tough, Vicente Luque for three rounds.

So, Perry boosters might argue that since Perry’s losses have come against top-tier competition, it’s not an indication he’s hit his ceiling or that he’s in decline.

But, if Gall goes out and runs through Perry, then the latter’s future as a headliner will certainly be in question.

Gall (6-2), meanwhile, is coming off a decision win over Salim Touahri last August, after being stopped by Diego Sanchez in March, 2019.

The New Jersey fighter has gone 2-2 in his last 4 outings, so this is also a big fight for Gall. A win could secure him a fight with at top 15 ranked opponent next.