The UFC has reportedly launched an investigation to see how veteran cutman, Don House, was permitted to wear markings tied to the QAnon conspiracy theory during the promotion's recent broadcast.

The Ultimate Fighting Championship strictly monitors all the gear and logos its fighters and staff wear at events. So, it’s not surprising to learn that the promotion’s looking into how veteran cutman, Don House, was permitted to wear patches representing the QAnon conspiracy theory. 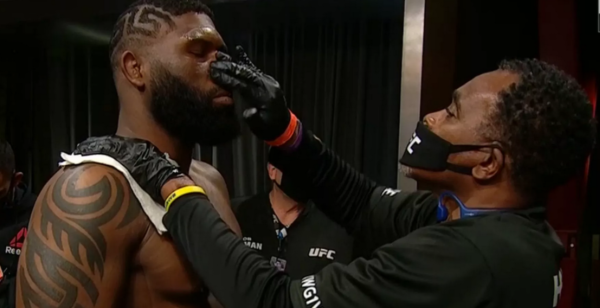 House has reportedly been told he cannot wear them again

During the recent, UFC Vegas 3 broadcast, House was captured on camera wearing markings that are tied to the QAnon movement.

According to an article from the Guardian in 2018, QAnon is a “bizarre rightwing conspiracy theory” that is “anti deep-state”. The article also argues that the theory is “not exactly coherent, and – like many conspiracy theories – is flexible enough to adapt to any new developments that might disprove it.”

A conspiracy theory that is associated with the QAnon alleges that well-known politicians and actors are members of an international sex-trafficking ring.

One of the markings House wore, however, reportedly signifies to QAnon supporters that “Where we go one we go all”. As a result, House told MMA Fighting the following:

“All the conspiracy, all the stuff they say about the group, I’ve got nothing to do with that. I just like the message: Where we go one, we go all.”

The cutman also reportedly said this.

“I always read this stuff where they say this is a spiritual group,” House said. “Some say they’re a part of child trafficking. No. They’re the complete opposite of that. They’re trying to expose that.”

“My message is simple,” House said. “It’s not about I signed up for a club that wants to overthrow the government. I’m not a part of that nonsense. But I do like the message where it talks about everyone being as one in the United States, and the planet, for that matter. That’s my message…”

House also reportedly informed the outlet that he was aware he needed permission to wear the badges, but that he didn’t seek approval, and wore them anyways.

Recently a QAnon flag was spotted flying above the world-famous, Jackson-Wink MMA gym in Albuquerque, New Mexico. But the team claims it was put up without them knowing.