Jorge Masvidal is not fighting Kamaru Usman next after sparring with the UFC over his contract. But, according to the man who is fighting for the belt, Gilbert Burns, 'Gamebred' should have gone a different route.

Jorge Masvidal has been one of the people recently to put the issue over fighter pay back into the headlines. But, according to Gilbert Burns, the outspoken welterweight would have been better served keeping his contractual issues with the UFC behind closed doors. 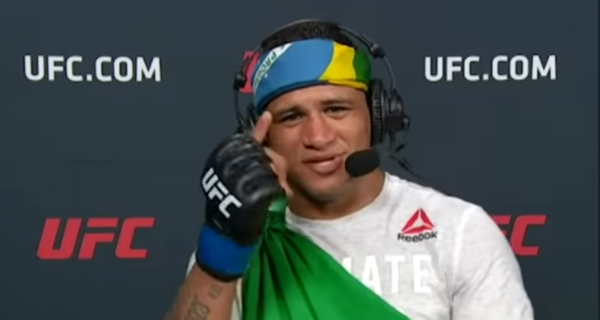 For much of 2020, the expectation was that Masvidal would end up fighting the welterweight champ, Kamaru Usman next. But, as the UFC tried to get the fight signed for this summer, Masidal claimed the promotion was offering him less than what he made for his bout with Nate Diaz.

Tensions ratcheted up from there, and Masvidal proceeded to question why fighters earn significantly less revenue from the UFC than athletes do in other, major sports leagues.

Well, meanwhile, the surging ‘Durinho’ was ultimately tapped to fight Usman on July 11th, at UFC 251. While talking to MMA Fighting recently, Burns had this to say about the deal he reached for the fight.

“They offered me a great amount of money,” Burns said. “More money than a lot of guys get fighting for the title. I’m happy for my situation. But I’m putting myself in that position to get those fights.

“I understand Masvidal’s side, he wants more money. But I think it all comes down to management. If you just signed a deal, how come you going to ask for a new deal? It just doesn’t make sense. I think it’s all in the negotiations.”

Burns also made this argument, while discussing Masvidal’s public beef with the UFC, over his contract.

I think my case is a strong case. He was fighter of the year in 2019. I’m already two fights [in this year], two great performances, I believe I earned the title shot, but I understand those guys want more money and everything.

I think there’s a better way to get those deals done than just complain.

I just think there’s a better way than going on social media [and saying], ‘Oh let me go, give me more money or let me go.’ I think you’ve got a better way to do business than this way.”

Does Burns have a point?

So, there’s a couple of ways to look at this. On one hand, if Masvidal had kept his issues with the UFC private, it’s possible that maybe the promotion would have given him more than what was originally tabled.

It was reported that the UFC offered Masvidal the same amount of money for the Diaz fight at the last minute. But, by that juncture, tensions had reached a boiling point and the fight wasn’t signed.

But, if Masvidal is in part, hoping to create significant, far-reaching change, in terms of the UFC’s compensation model, then you can understand why he’s been airing his criticisms publicly. Particularly the questions regarding how much share of the UFC’s overall revenue fighters make, in comparison to other major sports.