Recently there's been buzz about Sean O'Malley and Cody Garbrandt throwing hands, but Dana White's reporting fans shouldn't expect to see that fight anytime in the near future.

Recently Sean O’Malley let it be known that he’s very interested in fighting Cody Garbrandt next, and he also opined that “No Love” wouldn’t take the fight.

Well, whether that’s accurate or not, it doesn’t matter for now, as Dana White says the fight won’t happen just yet. 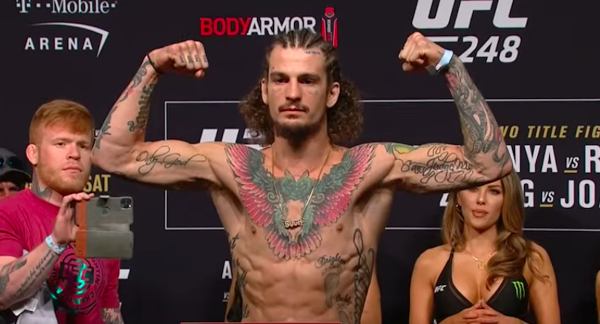 Both O’Malley and Garbrandt fought at the recent UFC 250 card, and the bantamweights scored electrifying knockouts over Eddie Wineland and Raphael Assuncao, respectively.

After the event, O’Malley was asked about the possibility of fighting Garbrandt next, and he made it clear he was interested. He also argued, however, that Garbrandt wouldn’t take the fight.

The way O’Malley sees it, Gabrandt has more to lose than gain by fighting the rising star. Further, O’Malley is certain he’d KO the former champ.

But, as noted above, that debate doesn’t really matter for now. While appearing on The Schmozone Podcast recently, White was asked about the possibility of Garbrandt vs. O’Malley. The UFC President said this (quotes via MMA Fighting).

“The problem is, if you take a Sean O’ Malley, first of all he has been off for a couple of years, he’s a young kid, he’s just coming in,” White said.

White was referencing the fact O’Malley has only fought twice since 2018, due to USADA flags, which eventually were ruled as the result of contaminated supplements.

“He’s one of the kids we’re focused on and have been since the contender series. He had some issues that he had to deal with the last couple of years, which has been brutal, but it’s given him a chance to heal up, and here we are.”

Not all that surprising

So, if you’re shocked by White’s comments here, you probably shouldn’t be.

There’s no question that there’s a ton of potential in Garbrandt vs. O’Malley, both in interest and action. But, it’s clear the UFC has big plans for O’Malley, and putting him up against a former champ right now might be risky.

If both men win their upcoming bouts, however, don’t be surprised if we see this match-up in 2021.