A video showing a huge Great White Shark swimming underneath people will likely have you think twice about getting in the water.  The close encounter of the ocean kind is more than a little harrowing. As soon as the surfers noticed the beast swimming below then, they booked it for shore.

This occurred on the coast of South Africa in Plettenberg Bay. Now, swimmers and surfers are being asked to use caution for obvious reasons. Unless you have a death wish, it’s in your best interest to steer clear of a Great White Shark [1].

A surfboard is not going to provide you with protection against such a huge beast. 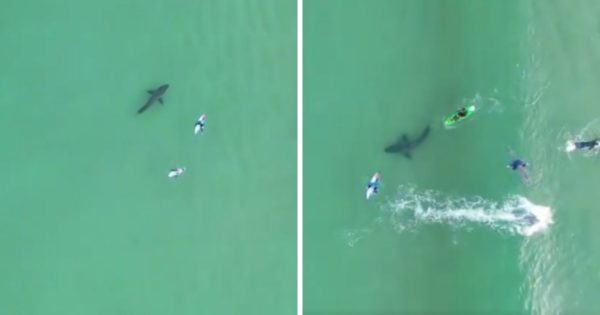 The drone video was captured by a young teen whose father immediately contacted authorities so the surfers could be notified of the danger beneath them.

From The South African [5]:

The footage was captured by 14-year-old nature enthusiast Zach Berman, who is spending time in Plettenberg Bay documenting wildlife during lockdown.

He said that he was monitoring the sharks before things got seriously hairy and he saw the shark in question heading to the group of surfers.

“We normally fly the drone to capture nature. I was monitoring the sharks to see how close they got to the surfers,” he told The South African.

“I noticed that the shark was heading from far down the beach towards where the surfers were and informed my dad’s friends to get them out the water.”

While Berman’s father was busy contacting Sea Rescue, Zach could only watch on the monitor as the shark swam closer and closer to the surfers.

“He was on his way to get them out and by then the shark was moving quite fast,” he said. “When the shark goes underneath the boards [Sea Rescue] hadn’t arrived yet.”
“It was really scary, standing there with the remote control watching this shark head towards the surfers. You really don’t know what to do in that situation.”

Sea Rescue was shocked and grateful that the teen had taken the video and his dad had alerted them. They shared the shocking video on social media to warn others.

The drone video can be watched below.

It shows up how close the massive killer was to the people. This was very close to shore so the water wasn’t even that deep! Sea Rescue is warning swimmers and surfers to use extreme caution.