Claudia Gadelha and Angela Hill went to war at UFC Florida as many expected, and it was Gadelha who narrowly emerged with the win.

Claudia Gadelha and Angela Hill threw everything they could at each other, tonight at UFC Florida, and two judges saw the fight for “Claudinha”. 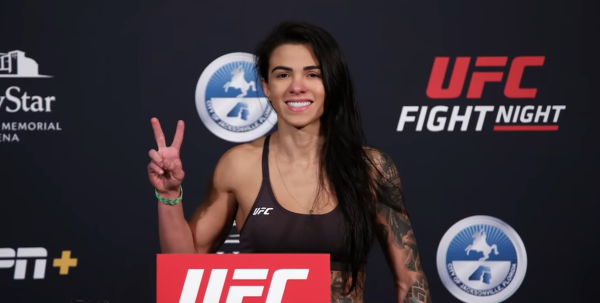 Hill came out pressuring and Gadelha looked to counter in the opening minutes. Both women fired big shots. Mid round, the fighters clinched up and eventually, Gadelha swept her to the floor. Gadelha worked from sidemount for quite a while, but was unable to do much with the position at first. Late in the round, however, Gadelha landed some shots before Hill got back to her feet.

Hill moved forward in round two and stayed busy with her punches. Around 90 seconds in, she sent Gadelha to the floor with a huge right. Hill let Gadelha get back to her feet and not long after, she scored with some nice shots of her own. Later in the round, Gadelha tagged Hill with a huge right that moved her back. Hill continued to fire back, however, and she planted hard shots of her own. Hill threatened with a big knee right before the round ended.

Both women continued to stay busy in round three, and both fired big punches. Gadelha’s face was the worse for wear between the two. Hill appeared to be the fresher of the two in the final frame. The striking war continued, and late in the round, Gadelha scored with a big elbow. Hill continued to fire back right until the final horn. Great fight.

Here are the results so far for UFC Florida.