It remains to be seen if Jon Jones and Francis Ngannou ever end up fighting. But recently Stipe Miocic shared his thoughts on whether "Bones" can defeat the feared slugger, like he did.

As it stands right now, Jon Jones and Francis Ngannou are not booked to fight. But, if the star ever do clash, does Stipe Miocic think Jones can defeat the ridiculously, dangerous heavyweight?

Yes. But, it doesn’t sound like he’d be betting the house on it. 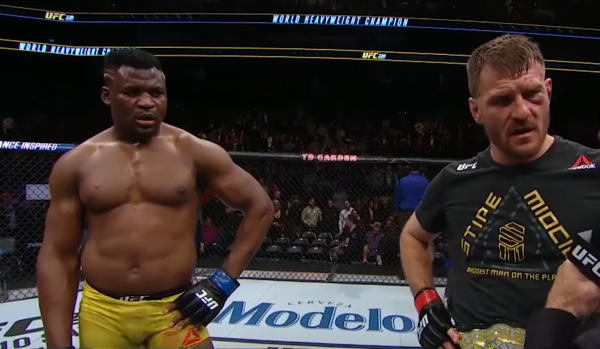 Recently the MMA world was buzzing about the possibility of Ngannou fighting Jones, after the latter relayed he was interested in fighting the feared slugger next. Ngannou proceeded to make it known that he’s down to fight the light-heavyweight champ.

Since then, however, hopes for the all-star fight have been diminished somewhat. As Jones has claimed that the UFC isn’t willing to pay more for the fight, and as a result, he’s going to focus on his light-heavyweight title.

While it remains to be seen if we see the two fight, Miocic was asked for his thoughts on the contest, while talking to MMA Fighting. Here’s what he had to say.

“That would be a good fight,” Miocic said. “Interesting matchup. I think anyone fighting [Ngannou] is a tough fight cause he’s so explosive and he hits super hard. That’s the one equalizer.

“He might not be as technically sound as Jon Jones but he does have power.”

“I definitely think [Jones] can win with a great game plan but like I said anything can happen,” Miocic said. “You’re wearing small gloves, heavyweight division, dude throwing bombs. Anything can happen honestly.”

Considering Jones’ comprehensive game, his reach and athleticism, it would be silly to say he can’t beat Ngannou. Further, Jones would likely bulk up for the fight, if it were to get signed.

All that said, there’s no question that Ngannou could win the fight, and do so quickly. Just ask the likes of Cain Velasquez, Curtis Blaydes, Junior dos Santos and Jairzinho Rozenstruik.

Miocic talks timeline for next bout

Jones – Ngannou aside, Miocic was also asked about when he thinks he’ll be fighting next. At the beginning of 2020, the plan was to have him fight Daniel Cormier for a third time this summer.

Due to the coronavirus pandemic, however, Miocic has said he won’t be able to fight until later in the year. Not only because of his responsibilities as a fireman, but because he can’t currently train at gyms in Ohio.

But, during the aforementioned interview, Miocic did say the following.

“I’ll be fighting before the end of the year, no question,” Miocic said. “100 percent.”

There you have it. Now it just remains to be seen when that will be. Early fall?