Lio Rush continues to make enemies in WWE, even though he doesn’t work there anymore. Plus, Shane McMahon on what Undertaker said about him jumping off Hell in a Cell at WrestleMania 32.

One thing Lio Rush was great at in WWE was catching heat. Even after his departure [1], he is still having problems.

Also, Henry mentioned how he helped form an elite group of African American wrestlers. Apparently, those wrestlers asked Henry if they should “come for” Rush.

Henry declined, but that does not mean he is in a good mood. Rush is now talking about going to the courts to handle the matter.

TMZ [2] spoke to Henry, who is not backing down to Rush’s legal threat.

“If you go down to the performance center at NXT, probably 25 I think, people of color in the facility, probably about 80 plus percent of them I helped get them there. I mean, it’s completely opposite.”

“He knew that I get a lot of attention. I have a lot of followers and he released the album, or song, or something, and he wanted to use that to get some attention. Get some buzz.”

“If he would’ve called me, I would’ve done it anyway. We would’ve just worked it. I would of really talked it up. We would of made world news, but now he said something slanderous.”

“My lawyer went to Harvard. I don’t know what lawyers he’s dealing with, but I got those Ivy League people around me, and they’re pissed.”

“He needs to apologize.”

https://t.co/7owIxNkgAQ [5] Mark Henry has a warning for ex-WWE wrestler Lio Rush … stop defaming me, or my (Harvard educated) lawyers are going to file a lawsuit against your ass!!

For now, we will have to see what happens between Henry and Rush.

Rush still has about 60 days before his non-compete clause expires [7] and Henry works for WWE as an ambassador. But, Rush has teased retirement. [8]

Shane McMahon On Jumping Off HIAC 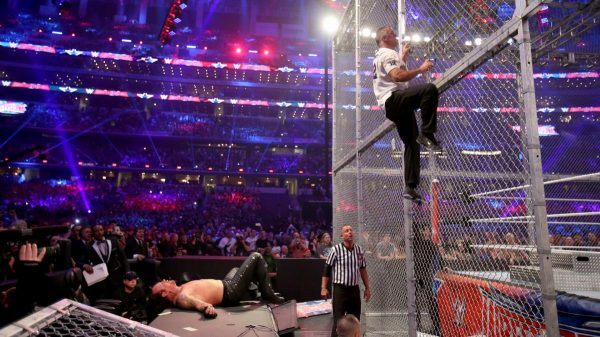 At WrestleMania 32 [9], Shane McMahon took on Undertaker inside Hell in a Cell. The match was unexpected as Shane was not discussed to battle Undertaker.

Undertaker won, but talk was about the final bump. Shane jumped off the top of the Cell and crashed through an empty table below.

In a column for ESPN [10], Shane discussed what Undertaker said before and during the match.

“He was not a proponent of me jumping off the cage,” wrote Shane McMahon. “Not taking anything away from Mick Foley, but this was the new Hell in a Cell. This was bigger, substantially higher.

“Mark would say there were other things we could do, different iterations. But I told him no. This is what the story needs.”

“It was David vs. Goliath, and you’re expecting David is just going to be killed. In that match, I had exhausted everything in my toolbox to try and win. This is what WrestleMania needs.”

Shane’s Injuries From The Fall

“I blew my belly button out — an umbilical hernia — because I hit so hard [on impact]. I didn’t expect that force to be that hard. But oh my god, it was.”

“We knew we had it all the way through the match, just based on the reaction. He was happy with it when it was over.”

Shane never shows fear. Despite being the son of a billionaire, he still felt like taking an unnecessary bump.

Years later, Shane would duplicate the spot against Kevin Owens. In conclusion, Shane might be one the craziest people who work for WWE.