Daniel Cormier and Jon Jones [1] have one of the greatest rivalries in MMA history. But, “DC” is crediting the UFC’s light-heavyweight champ for saying he’s willing to throw hands with feared, heavyweight slugger, Francis Ngannou. 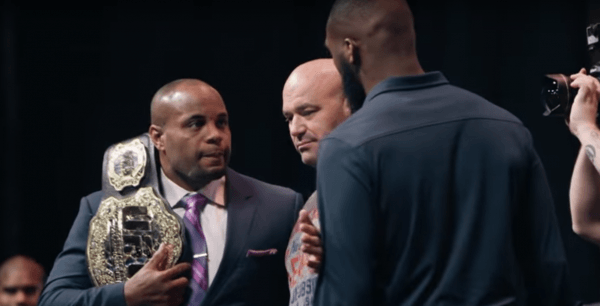 Jones has talked about the possibility of fighting Ngannou in the past. But, after Ovince Saint Preux took on heavyweight Ben Rothwell last week, Jones let it be known that he’s willing to fight Ngannou next [2], not way down the line.

Jones’s headline-grabbing statements came not long after Ngannou needed less than 30 seconds to bomb out Jairzinho Rozenstruik at UFC 249.

Well, during Cormier’s most recent talk with ESPN’s Ariel Helwani [3], he was asked to weigh-on on the Jones – Ngannou situation. Here’s what the former champ-champ had to say (quotes via MMA Junkie [4]).

“I will insult Jones on any day of the week, but I will also give him credit where credit is due, and I truly believe that this Francis Ngannou thing is one of the most gangster things in the world,” Cormier said.

“Why would you be afraid of anyone, especially if you’re a guy that has the accomplishments of Jon Jones?

Why? That’s the thing I don’t get when people say me or Jon Jones, that we’re afraid of somebody. It’s the most asinine thing in the world.

“I think that this Jones thing is cool. He’s like, ‘OK, you want to fight? Let’s do it.’ That’s what any person in the world, a true fighter, would do, and I think hats off to Jones.”

Now, even if you’re not a fan of Jones, it’s hard to disagree with what Cormier said here. “Bones’s” willingness to fight one of the most dangerous men on the planet, who is also considerably bigger than him, is pretty impressive.

Some, however, have opined that Jones isn’t really serious. But as Cormier noted, it’s hard to imagine that being the case.

Due to Jones’s reach, abilities and accomplishments, chances are he does feel very confident he can defeat Ngannou. Further, if were to do so, it would be a significant addition to his legacy.

It’s also worth noting that Jones’s callout comes at a time when more and more people are questioning his peak years are behind him. Jones narrowly got by Thiago Santos last summer, and it was the same in his bout with Dominick Reyes this past February.

In fact, a lot of people scored that fight for Reyes. So, maybe Jones is looking for a way to silence any of his doubters, with a pivotal win over Ngannou?

After that, he could go after the heavyweight crown as well?