Due to the coronavirus, WWE is making a drastic decision and pulling WrestleMania 36 from Tampa. Instead, it will air live on the WWE Network. 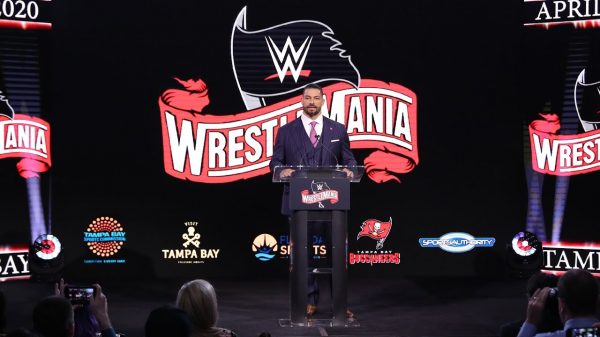 The coronavirus has affected the way people now live and also played a major role in sporting events. Outside of the UFC, almost every event around the world has been cancelled. Even the UFC is now struggling to find venues.

We mentioned earlier how WrestleMania 36 from Tampa, Florida, was a long shot. The commissioner said he would pull the plug [1] if WWE did move forward as planned. Also, the CDC’s recommendation would have made the event impossible [2] due to limiting the number of people at events.

Well, WrestleMania 36 will no longer take place from the Raymond James Stadium in Tampa, Florida. The day remains the same with April 5, but the biggest show of the year comes from the WWE Performance Center. Per the press release, the show starts at 7 PM EST from a closed set with only essential personal.

“In coordination with local partners and government officials, WrestleMania and all related events in Tampa Bay will not take place. However, WrestleMania will still stream live on Sunday, April 5 at 7 pm ET on WWE Network and be available on pay-per-view. Only essential personnel will be on the closed set at WWE’s training facility in Orlando, Florida to produce WrestleMania.”

In such crazy times, we can add this to the list. Never has a WrestleMania come from the WWE Performance Center. Many speculated WWE would move the event to June or July, but the Coronavirus does not seem to be getting better in the United States. Also, it should be noted that this was Vince McMahon’s last resort.

SmackDown already aired from the WWE Performance Center in what can only be described as a bizarre show [3]. Tonight’s RAW will follow suit and NXT will not return to Full Sail University for at least six weeks [4].

Roman beating goldberg with no crowd. Atleast you won’t have to worry about crowd reaction lol

Why not just postpone everything until June ?

This was supposed to be my first mania. Thanks guys for ruining a 14 year olds dream

A Wrestlemania without a crowd is just dead & meaningless. Salute to anyone who’ll actually tune in because I’d rather watch grass grow

More From The WWE Universe

This is so stupid. Just postpone the event and wait. People paid for this show and I hope they get a refund.

Or here’s a wild idea: Postpone it then all your workers can stay home and be safe. pic.twitter.com/7GbjrwiUFS [14]

So no Edge entrance pyro? pic.twitter.com/FbeSnmC4oH [16]

There’s literally a ticketmaster ad at the bottom of this advertising tickets 🤦🏼‍♀️ pic.twitter.com/eDbYBJZPiv [18]

A Wrestlemania without a crowd is just dead & meaningless. Salute to anyone who’ll actually tune in because I’d rather watch grass grow

As of now, no word on ticket refunds. WWE also confirmed that NXT Takeover Orlando and the Hall of Fame will also not place in Tampa. We are still waiting on news if they also come from the WWE Performance Center.

“The WWE Hall of Fame Ceremony and NXT TakeOver will not take place as previously scheduled. We will share further details as they become available.”

The story is developing, so please stay tuned for updates on this historic decision by WWE.