Before American Top Team took steps to stop its fighters from trash talking one another through the media, Joanna Jedrzejczyk fired back at Colby Covington.

American Top Team founder Dan Lambert recently announced that fighters who insult other team members through the media will be sent packing from the famed gym. But, before the trash talk ban was implemented, Joanna Jedrzejczyk had some less than kind things to say about Colby Covington. 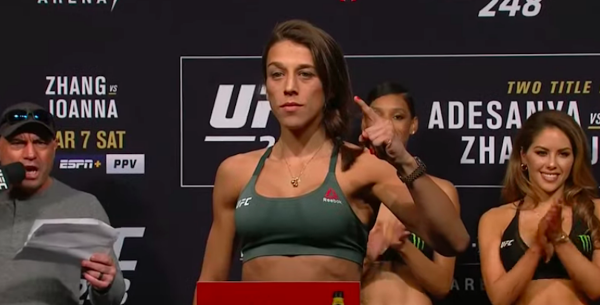 In recent years, Covington has become one of the most polarizing and disliked fighters in the game, on account of   statements he’s made and insults he’s flung. Some of the comments Covington has made about various issues, people, fighters etc haven’t sat well with some of his teammate at ATT. In addition, Covington has outright feuded with members of the team, like Jorge Masvidal and Jedrzejczyk.

Case in point, recently Covington blasted Joanna’s recent performance against Zhang Weili, and he also claimed she and Masvidal are having a relationship. Before the ban on trash talking was implemented, Jedrzejczyk spoke with the Eurobash podcast. When asked about Covington, and his comments, the former strawweight champ said this (quotes via MMA Fighting).

The ban on trash talk at ATT

Lambert recently spoke with MMA Fighting about the ban, and while discussing why he made the decision to enact it, he said this.

“There’s no conversation to be had with anybody now as far as what’s tolerated and what’s not tolerated. That’s another part of reason for having the policy in the first place. I don’t want guys having to look over their shoulder at the gym and worry about seeing this guy, and this guy said this about me, and I’ve got people on Instagram blowing me up every time this guy says something and I need to go and respond to this guy, or I’m going to look like I’m weak,” he said. “I’ve never really subscribed to the idea that it’s going to cause fights in the gym, because I think everybody’s respected our gym, and I think we’ve done a pretty good job of setting that up from the beginning: respect the gym.

”I just think I underestimated the trickle-down effect of what stuff outside the gym does to people in how they feel and the pressure that they feel from others. I think it will help easing tensions at the gym between individuals, but I’m not thinking I need to get security at the gym, or have people stand between these two guys. You work here. It’s a place of business. Come and do your business. I’m not asking anyone to train with somebody they don’t like. This gym’s 40,000 square feet. If you don’t like someone, f*cking walk down a different hallway.”

There you have it. So, could we see a fighter get shone the door on account of this new policy? And could it be Colby? Or will he follow the rules set by Lambert? Who he has repeatedly praised over the years?

UFC Heads Back To Fight Island With Israel Adesanya-Paulo Costa