All signs point to Jorge Masvidal fighting Kamaru Usman next, and not Colby Covington. [1]But, the latter maintains that if he and his former friend fight, it will end badly for “Gamebred”. 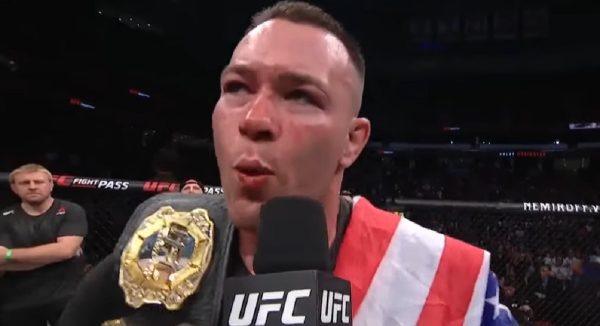 It wasn’t that long ago really when Masvidal and Covington were still referring to each other as friends in interviews. But last year, as Masvidal jumped up the welterweight ranks thanks to several big wins, their relationship went off the rails and turned into a bitter feud. Masvidal accused Covington of not paying one of their coaches, while “Chaos” claimed the welterweight was just jealous of his success.

Well, as it stands right now, since Covington was stopped by the champ Kamaru Usman in December, Masvidal is expected to challenge for the belt next. But, that hasn’t put a lid on the Covington – Masvidal issues. During a recent interview with Submission Radio [2], Covington had this to say about his former friend (quotes via MMA Fighting [3]).

“What’s my message to Jorge ‘Journeyman’ Jorge Masvidal a.k.a. ‘Street Judas,’ the guy who tried to stab me in the back for money and business?” Covington said. “You got your ass-whooping waiting, buddy. You got your 10 seconds of fame. They’re up. You hit lightning in a bottle. But let’s look at your record, buddy. You got double digit losses on your record. You’re a 50/50 average mediocre fighter. Stop acting like you’re so great, you ain’t great. You know what happened when we used to train for the last eight, nine years. There’s never been one second where you have ever beat me.

“So, if you want to get embarrassed in front of the world, let’s do it, because Jorge keeps talking about wanting to fight in the streets. It’s like, dude, if we fight in the streets who’s going to pay your medical bills, Jorge? At least if we fight in the UFC octagon I’m gonna break your jaw, I’m gonna rearrange your face, and the UFC will cover your medical bills. So, let’s leave our business in the octagon. But he doesn’t want to fight me in the octagon, he knows better than that.”

Now, it’s worth noting that Masvidal claims he put Covington through “trauma” [4] when they trained. So, “Gamebred” has a different take on how their training sessions went.

When you consider the abilities of both men, and that they’re both at the top of the welterweight division, there’s a good chance they’ll fight in the Octagon at some juncture.

Could this be the last we see of Covington and Masvidal trashing each other?

If you missed it, recently ATT owner Dan Lambert announced that trash talk between the gym’s fighters will no longer be tolerated (due to the issues it’s caused). So, it will be interesting to see if Covington and Masvidal abide by the new rules.