UFC Columbus: is Francis Ngannou Impressed With Jairzinho Rozenstruik? No. No, He’s Not

Jairzinho Rozenstruik has gone undefeated in MMA to date and has a very long list of kickboxing bouts on his resume, but evidently Francis Ngannou's not impressed by the rising heavyweight.

It hasn’t taken Jairzinho Rozenstruik long to move into the UFC’s heavyweight, title shot mix on account of stopping every man he’s faced in the Octagon so far. But, according to the next fighter who will face him, Francis Ngannou, nothing Rozenstruik’s shown has impressed him. 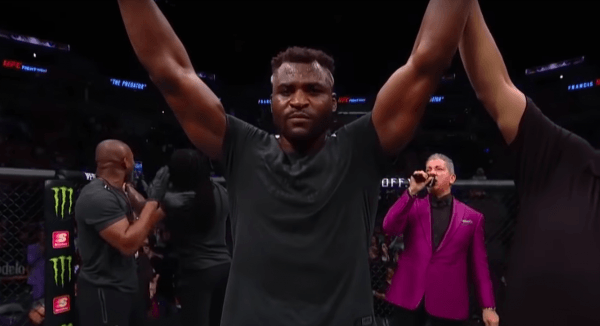 Ngannou hasn’t seen anything to impress him

After Rozenstruik scored a late, come from behind win over Alistair Overeem in December, the accomplished kickboxer let it be known he was willing to fight Ngannou next. Since the latter had been looking for a fight, the UFC put the bout together, and they’ll clash at the promotion’s March 28th card in Columbus.

Rozenstruik (10-0) has been tapped for the high profile and pivotal fight after going 4-0 to date in the UFC. In addition to Overeem, “Bigi Boi” has finished Alistair Overeem, Allen Crowder and Junior Albini.

Well, recently Ngannou was asked to share his thoughts on his next opponent, and the contender had this to say (quote via MMA Junkie):

“No I haven’t seen nothing to impress me,” Ngannou said. “Regarding that fight against Overeem, I mean, he got beat up the entire fight and he got lucky at the end of the fight basically by the early stoppage. The referee, in my opinion was early and you know, he gave him the win but honestly his UFC career, nothing to impress. I haven’t seen nothing, but with that being said, it’s not to underestimate him because he was a kickboxer and he has some good hands so he knows the striking game. Now lets find out what he knows about MMA.”

“…The only way I see the fight going is me knocking him out,” Ngannou said. “Round 1 or Round 2, I don’t know so I hope he’s good enough to pass Round 1 because Round 1 I’ll just take to set up.”

Does nothing in Rozenstruik’s arsenal really impress Ngannou? Not even his power? It’s possible. After all, in Ngannou we’re talking about one of the most feared strikers in the game. But, he would indeed be wise not to underestimate the Surinamese fighter, who also holds a kickboxing record of 76-8-1.

Ngannou comments on how the fight came together

Before Rozenstruik defeated Overeem, there was a lot of talk about Ngannou possibly fighting Alexander Volkov next. Obviously, that didn’t happen. While reflecting on how the bout with Rozenstruik came together, Ngannou said the following:

““Realistically, Volkov was the one making sense but Volkov has been turning down the fight several times,” Ngannou said. “Rozenstruik was obviously calling me out which is something that doesn’t happen often so at least with Rozenstruik, you know for a fact that the fight will happen.”

All that aside, if you like watching ridiculously dangerous, heavyweight strikers throw hands, you don’t want to miss this fight.