Recently it was reported Diego Sanchez's coach warned officials that the vet had been working on a deadly choke, prior to his bout with Michael Chiesa. Now, the latter's described his reaction upon hearing the news.

Following a report Diego Sanchez’s coach warned officials that the star could hurt Michael Chiesa at UFC 239, if they didn’t watch for his use of a potentially, deadly choke, the latter’s confirmed this did happen. 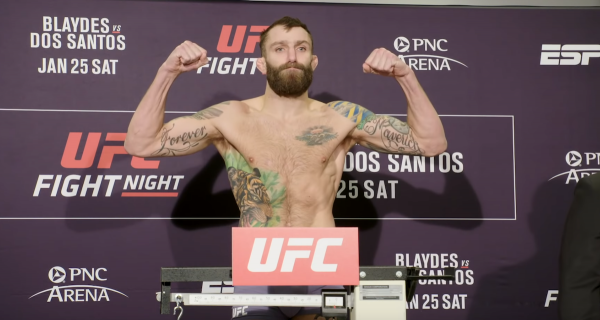 Chiesa recalls being told about the ‘Stone Cold Stunner’

Following Sanchez’s DQ win over Michel Pereira last weekend at UFC Rio Rancho, his coach Joshua Fabia has been in the news. Not only due to the approach Sanchez took in the bout, but recently it was reported Fabia warned Nevada officials prior to UFC 239 the fighter had been working on a technique, which could seriously hurt or even kill Chiesa.

According to the report, Fabia told officials that the referee should be ready to jump in right away, if Sanchez started applying the technique. Fabia was reportedly asked to demonstrate the move, and according to the sources, it was similar to the ‘Stone Cold Stunner’ that pro-wrestling star, “Stone Cold” Steve Austin used to do.

Well, if you thought the story sounded far fetched, Chiesa has confirmed that yes, he was approached about the move. While speaking to MMA Junkie, Chiesa said this:

“We’re in the back, and the antics are already going on through fight week, so I’m obviously assuming things are going to be a little weird on fight night – not this bad,” Chiesa said. “It kind of started when Don House came and wrapped my hands, and he was just kind of laughing. He was like, ‘Man, he’s being a wild man back there,’ not really giving me details, but I’m already catching wind that things are kind of weird in the locker room. Then the person that I’m not going to name came to me and was like, ‘Hey, I’ve got to tell you, there’s talks of this crazy submission that he wants to try on you.’”

“I got a demonstration of what it was, and I mean, I immediately started laughing,” Chiesa said. “I was like, ‘If you think for a second you’re going to like reverse ‘Stone Cold Stunner’ me in a high-level mixed martial arts contest, you’re off your (expletive) rocker – pardon my language. But yeah, I knew what the move was.

“It was like if he had my chin, and his chest was on the back of my head like a guy would go for a guillotine, and it was like he was going to rotate and turn his back to me while still holding my chin, basically putting the back of my neck on his shoulder, and drop down. We started laughing. We’re like, ‘This is so funny.’”

There you have it. If you don’t recall, Chiesa went on to win that fight by unanimous decision, and no, there were no ‘Stone Cold Stunner’ attempts.

Sanchez is defending his coach

There’s been a lot of talk about Sanchez and his coach recently, but it should be noted that the rugged vet continues to defend Fabia. Since 2018, the 38-year-old Sanchez has gone 2-.1