Jon Jones is booked to fight Dominick Reyes this Saturday UFC 247, but as the bout approaches, the 205 king has made it clear he's targeting heavyweight champ, Stipe Miocic.

It wasn’t that long ago when Jon Jones seemed to be putting the brakes on talk about him moving up to heavyweight. But, as the light-heavyweight champ gets set to fight Dominick Reyes on Saturday at UFC 247, “Bones” is reporting he really wants to fight Stipe Miocic. 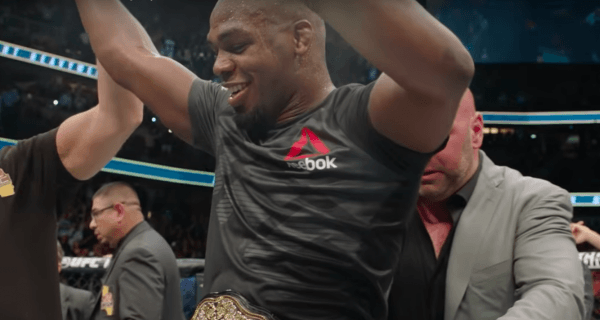 Talk about Jones moving to heavyweight at some juncture has been going on for years. Since Jones has pretty much dominated much of his opposition at 205, and because of his height and reach, a lot of folks want to see him fight at heavyweight.

Well, over the years, Jones has said he plans to make the move at some point. For example, Jones has said he wants to fight Brock Lesnar. But, after reclaiming the light-heavyweight title in 2018, Jones seemed more focused on enhancing his legacy at 205.

Fast forward to today, however, and that’s evidently changed. While talking to Ariel Helwani recently, Jone said the following (quotes via MMA Mania):

“I feel like me at a lean 230 is plenty. I feel like I could totally beat him, just based on his performances with D.C., our speed differences, my fight IQ, my versatility, my faith and confidence,” Jones added. “I think I’m the guy to beat him for sure. And I want to strike while I’m feeling hot.”

So, it’s not surprising to hear that Jones doesn’t believe he would need to fight at heavyweight at least once, before fighting Miocic for the belt. It’s certainly true that the added weight could impact his performance. But, Miocic isn’t a massive heavyweight. So, it’s not like Jones would be giving up much weight if he were to come in at say, 220, 225 for the fight.

Further, it’s highly unlikely that the UFC would have Jones fight someone else prior anyways. The big money fight is the championship bout. So, the promotion wouldn’t want to risk that by having Jones fight say, a top five ranked contender.

But will this happen?

That’s the big question. If Jones beats Reyes on Saturday one could certainly argue that there are no big fights for him left at 205. A win over Reyes would mean that Jones has defeated four of the top five contenders in the division. The #5 ranked Corey Anderson is the only contender he has yet to fight.

So, from that perspective,  the timing seems right to have Jones make the jump. That said, Dana White has made it clear they want to have Miocic and Daniel Cormier fight for a third time. So, we could see Jones fight one more time at light-heavyweight in 2020 (and if he loses to Reyes, it’s very likely an immediate rematch would be booked).