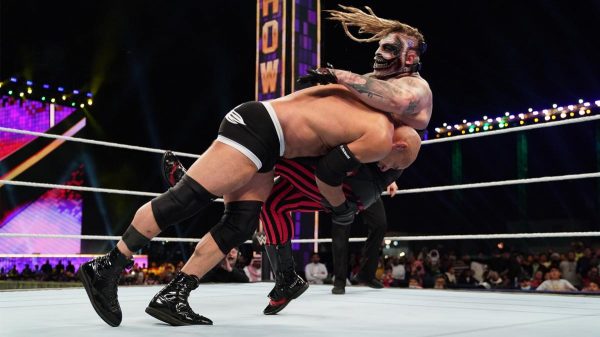 WWE returned to Saudi Arabia [1] and the main event featured Goldberg taking on Universal Champion “The Fiend” Bray Wyatt. In the end, Goldberg left with the title. But, fans were not happy.

The match lasted three minutes and there was little action. We got a few spears from Goldberg and the mandible claw from Wyatt. Then Goldberg hit a sloppy jackhammer to claim the gold. As you can imagine, fans were not [2] and they let their anger out on social media.

53 years old. I get that nostalgia sells, but if WWE don’t start building stars now then in twenty years time they won’t have any nostalgia left to sell. #WWESSD [3] pic.twitter.com/0aSqeuOj1p [4]

They buried what was the hottest thing in wrestling to put it on a part-time old man who can’t physically compete for more than 5 mins. What a joke. This company is obsessed with Brock and Goldberg idk why. The fiend was literally unbeatable this whole time #WWESSD [3] pic.twitter.com/cgG86UQI0z [6]

It’s been one hour since the #UniversalTitle [14] was taken from Bray Wyatt by Goldberg.

My body is beginning to violently reject it. Nausea, vomiting, dizziness are occurring. pic.twitter.com/amGTKs7HUC [15]

So we’re suppose to believe the match with Roman Reigns will be better? #WWE [8] #WWESSD [3] #WrestleMania [21]

#WWESSD [3] Props to Undertaker, Brock Lesnar and Goldberg for putting their egos to the side and putting over the younger talent today pic.twitter.com/rXCYL3NBfZ [24]

Bruh, why the heck is Goldberg the Universal Champ? #AEW [26] is starting to look more and more enticing…. pic.twitter.com/RPKMKC2fIQ [27]

All off this is still relevant to this very day pic.twitter.com/eRKwo78Dtt [29]

Nice to see Goldberg move on from the jackhammer to just doing a suplex. Gotta save himself in his old age. #SuperShowdown [31] pic.twitter.com/9e1M6Vgcz8 [32]

We will have to see what this means for WrestleMania [35]. It appears, Roman Reigns vs. Goldberg will happen for the belt. As for Wyatt, he could be facing John Cena. We should know a lot more come SmackDown, as Cena returns. [36]