Bret Hart Has Skin Cancer – Urges People To Get Checked

Bret Hart had his share of health problems, but now faces another. Bret Hart has skin cancer and has urged people to get checked.

Bad news has reached our office today, as it has been revealed Bret Hart has skin cancer. There seems to be no reprieve for the Hall of Famer whose had health problems in the past, too. He recently took to social media to reveal his diagnosis, but also warn others.

Goal for 2020 and beyond: wear more sunscreen! Basal cell carcinoma removal scheduled soon. Another opportunity to remind everyone to look after your health and #getchecked.

Bret Hart took to his instagram to reveal he has been diagnosed with skin cancer. According to the post, he is scheduled for a basal cell carcinoma removal in the nearby future.

Basal cells are the skin cells that are shed when new skin cells are formed. However, these cells can become damaged because of DNA damage. DNA damage is caused by long-term exposure to UV radiation. It can be from sun exposure to tanning beds. When the damage occurs, it can lead to cells growing abnormally.

The disease can manifest itself as a pink growth, scar, or even shiny bumps. Since they can look different from person to person, it is essential to get unusual marks such as this checked out. Based on Bret’s story, it seems like he has gotten himself checked out early, and this is positive for his overall prognosis.

Even though Hart has been diagnosed with cancer again, there is some minor good news. Basal cell carcinoma is a type of cancer that is slow-growing and quite treatable. The earlier it is detected, the higher the chance of recovery.

In addition to sharing his diagnosis with the world, the WWE veteran also took to social media to warn others. He urged people to get themselves checked, but also to use more sunscreen. 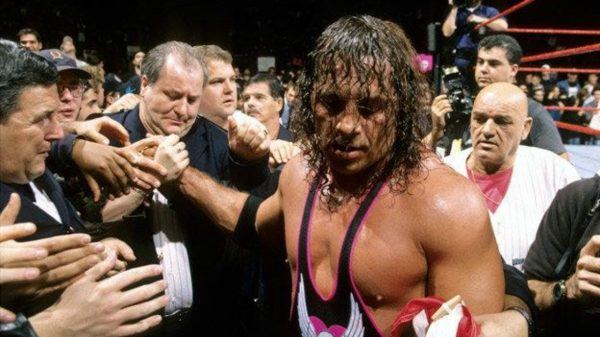 Since his retirement, the Hitman has suffered from numerous health problems. His problems started in the summer of 2002. After having a bicycle accident, he suffered a stroke. But that was not the end of it, the accident left him paralysed on the left side of his body. It took him many months of physical therapy to recover his mobility somewhat. He would write about this experience in his biography “Hitman: My Real Life In The Cartoon World Of Wrestling.”

The stroke left a huge impact on Bret and he became one of the spokespersons for the Stroke Recovery Canada Program. Unfortunately, this was not the end of his health problems. In early 2016, he was diagnosed with prostate cancer. He would eventually beat the disease after his cancer surgery. However, he mentioned he would be monitored closely every three months.

Despite beating cancer a few years ago, he has now been diagnosed with another form of cancer. We wish Bret Hart and his family lots of strength during this trying time.