Junior dos Santos was quickly taken out by Francis Ngannou last year, but the former heavyweight champ insists he's going to get that loss back. In fact, JDS is certain he will return to the top of the heavyweight division.

The latest title run of Junior dos Santos was quickly and violently halted by Francis Ngannou last June. But, as the former heavyweight champ gets set to battle Curtis Blaydes this Saturday at UFC Raleigh, “Cigano” is certain he can return to the top of the heavyweight division. In addition, JDS vows to avenge his loss to the feared slugger. 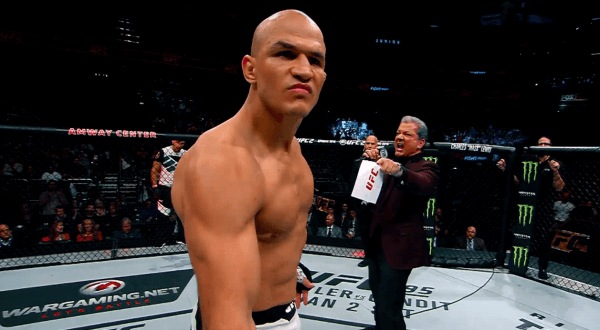 Dos Santos insists he will climb back to the top

When dos Santos was booked to fight Ngannou last summer, the former champ was on the verge of returning to the title shot mix, on account of a three fight winning streak. After JDS lost his rematch to current champ Stipe Miocic in 2017, the Brazilian proceeded to defeat Blagoy Ivanov, Tai Tuivasa and Derrick Lewis in his next three fights.

At UFC on ESPN 3, however, dos Santos was stopped by Ngannou in under 90 seconds. While there’s no shame in losing to the ridiculously, dangerous Ngannou, some have questioned whether the 35 year-old dos Santos can still make another title run.

But, while talking to the media ahead of his bout with Blaydes, the charismatic fighter said this (quotes via MMA Junkie):

“Sometimes, you know, it’s not your day – things don’t happen the way you want,” dos Santos said. “And what? Are you going to cry for that? C’mon. Keep moving forward – that’s what I’m doing. I believe in me. I can see the truth I see in my head. You guys would be amazed, and that’s what I’m trying to show you guys. That’s why I am here. I really believe I deserve the top of this division, and I will get it. I got there once, I’ll get there again.”

Now, not everyone may believe that dos Santos has what it takes to reclaim the heavyweight title at this stage of his career. But, to write him off completely at this point, is premature. 35 is not that old for the heavyweight division, and clearly dos Santos still has some serious pop in his hands.

If dos Santos takes another loss this Saturday, however, then his road back to a title shot will get considerably longer. In Blaydes he’s going to face one of the most explosive wrestlers on the roster, who has a nasty, nasty top game. That’s why dos Santos is the underdog on the betting lines heading into this Saturday’s action.