Herbert Burns made his official UFC debut today on the Fight Pass prelims, but due to the jaw-dropping knockout he scored, a lot of folks are seeing what “The Blaze” did… 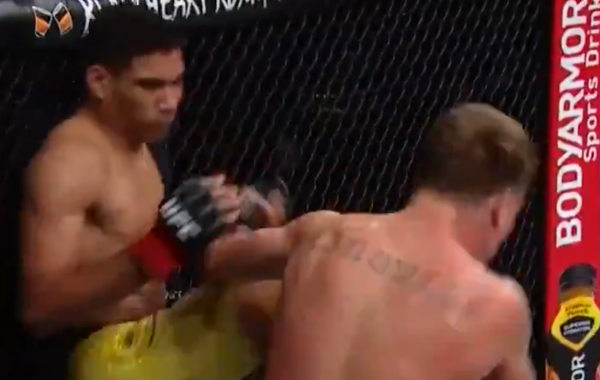 The Brazilian featherweight, who is the younger brother of welterweight Gilbert Burns, locked up a UFC appearance last summer by submitting Darrick Minner on Dana White’s Contender Series. At UFC Raleigh [1] today he squared off with former M-1 Challenge champ Nate Landwehr.

As you can see by watching the clip below, Burns ended the fight with a booming knee in round one.

Welcome to the UFC, @HerbertBurnsMMA [2]! 🇧🇷

With the victory, the 31-year-old Burns moved his overall record to 10-2. Landwehr, who was also making his Octagon debut, has his fall to 13-3.

In the main event of today’s card, which is being hosted by the PNC Arena, former heavyweight champ Junior dos Santos will take on Curtis Blaydes.  In the co-headliner, Rafael dos Anjos will battle Michael Chiesa in a welterweight contest.