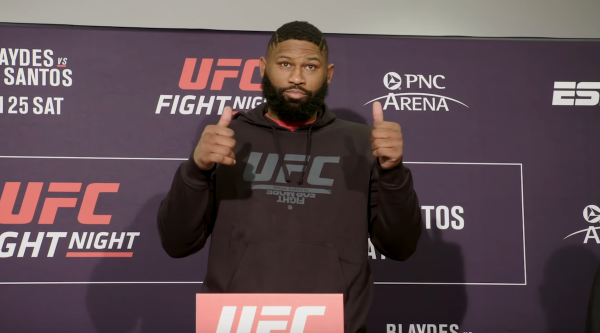 JDS came out with his left arm low in anticipation of a Blaydes’ takedown. JDS tagged Blaydes with a quick right and the latter shot in, but was unable to score the TD. Blaydes started mixing in some strikes and feints and continued to move forward. Mid-round, Blaydes was able to clinch up and push JDS to the fence. But, Blaydes hit JDS low with a punch and the action was momentarily stopped. JDS stepped nicely out of the way of Blaydes’ advance but he ate a right moments later. Blaydes scored with a couple more punches but failed to secure another TD. Right before the round ended dos Santos just missed a massive uppercut.

Blaydes continued to press forward in round two and “Cigano” looked to counter. A bout a minute in, Blaydes decked JDS with a massive right that rocked the former champ badly. Blaydes followed up with more shots along the cage, and the fight was stopped. A massive, massive win for Blaydes.

Here are the complete results for UFC Raleigh, which was hosted by the PNC Arena.