Conor McGregor [1] needed just 40 seconds to take out Donald Cerrone at UFC 246, and as a result, the former champ’s been receiving a lot of virtual high fives and praise for his performance. But, one person who clearly wasn’t blown away by the win is Kevin Lee. [2] 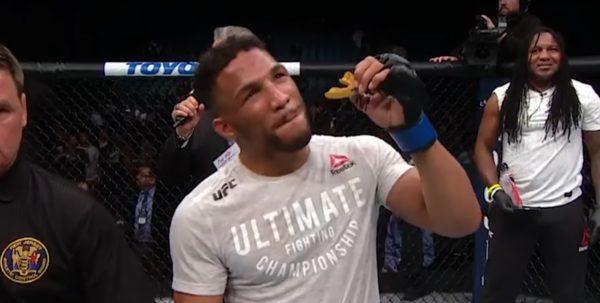 Leading up to UFC 246, McGregor was a sizeable favorite to beat Cerrone. Further, many people opined that if Cerrone didn’t find a way to keep McGregor at bay, then the latter would stop him in round one or two. That said, there didn’t seem to be that many people who were predicting McGregor would finish the fight in under a minute.

Well, since UFC 246 went down, Lee appeared on Ariel Helwani’s MMA Show. [3]While discussing McGregor’s pivotal win on Saturday, and whether he was impressed, the lightweight contender said this (quotes via MMA Mania [4]):

“I ain’t been impressed with nothing in UFC for a minute, to be honest. This sh-t is starting to get wack,” Lee said.

“And Conor is up there with it,” he continued. “I mean, he got the job done and got the money, but he fought a guy that was tailor-picked for him, and was chinny. Anytime you go down by shoulder strikes, and it stings you, and this ain’t too slick ‘Cowboy,’ I am not one of those people that think ‘Cowboy’ laid down. But if a shoulder is hurting you, that means your chin is gone and they already knew that. So, I’m not impressed. I am a little irritated by it, to be honest.”

“When I have to go to the store and hear people talking like he did this to ‘Cowboy,’ and that he’s back, blah, blah blah. Like, come on man. We out here really fighting. I’m really fighting, I had my comeback fight in November, and I took on an undefeated guy. I didn’t take on someone that is a little over the hill. So yeah, I am a little irritated by it, to be honest.”

Now, Cerrone boosters and McGregor supporters too will likely jump on Lee for the comments above. While many people believe Conor should have fought Justin Gaethje next, and that Cerrone was hand picked for an opponent, it’s hard to outright dismiss the win. Cerrone may be past his prime, and his chin might not be what it was. But, it did look like McGregor had some serious momentum behind the shoulder strikes [5] he threw. Case in point, it’s very rare you see that technique do the damage it did.

Lee, meanwhile, is coming off a ridiculously, impressive KO win over Gregor Gillespie in November, which he referenced above. Up next, at UFC Brasilia on March 14th, he’ll battle fellow contender Charles Oliveira.