Kamaru Usman still has work to do at 170, but recently the welterweight champ outlined why he would never agree to battle Israel Adesanya or Khabib Nurmagomedov in super fights.

If you’ve ever wondered how a fight between Kamaru Usman and either Khabib Nurmagomedov or Israel Adesayna would play out, it looks like that may be restricted to a thought exercise. Or, if you’re the gaming type, perhaps via a few rounds of EA Sports’ UFC 3. 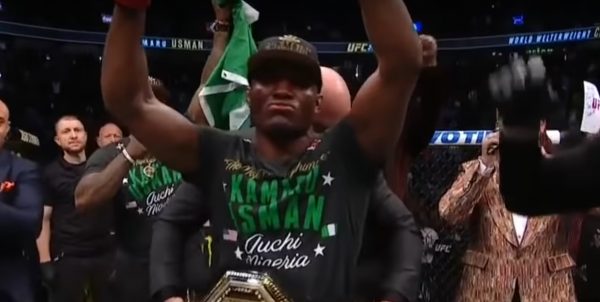 Usman comments on whether he’d fight Khabib or Adesanya

As it stands right now, it’s not completely clear who Usman will fight next, following his stoppage win over Colby Covington in December. The consensus seems to be that it will be either Jorge Masvidal, or the winner of the March 21st bout betwen Tyron Woodley and Leon Edwards.

Well, recently Usman appeared on Joe Rogan’s podcast again. While talking about the possibility of facing the lightweight champ Nurmagomedov or the middleweight champ Adesanya, however, the welterweight champ said this (quotes via MMA Junkie):

If you’re wondering about Usman’s ties to Khabib, they’re both represented by Dominance MMA. So, clearly Usman has formed a solid relationship with the undefeated fighter. As far as Adesayana, as Usman noted, they both come from Nigeria, so his stance here shouldn’t be a surprise either.

But what if things change? After all, we’ve seen plenty of friendships go off the rails in MMA right? Well, even if that were to happen, Khabib has said more recently that he’s focused on lightweight and it’s hard to imagine Usman making 155.

Usman at middleweight seems more likely. But, for now, both champs have challengers to deal with in their respective divisions, and both fighters are pretty early into their title reigns.

So, who is realistically next for Usman? In what will be his second title defense since he took the belt from Woodley in March, 2019?

While talking about his next bout with Rogan, Usman said this:

“We’ve talked,” said Usman, who is still recovering from a wrist issue. “I’ll be ready. Give me a month and let this thing heal up. I can make a fist now. I’m cracking. They put out the guys, and let’s be honest, if you look at the division, I’ve beaten almost everybody there in the top 10. It’s a matter of who they really want, what’s next. Dana (White) said they really want Jorge. Jorge is the next guy.”

Ya. Increasingly it looks like Usman – Masvidal will get tabled. White has called for it, and Conor McGregor has yet to definitively call “Gamebred” out.