Last year, Justin Gaethje [1] drove for a bout with Conor McGregor to no avail. But, now that the former UFC champ has returned to the win column, Gaethje’s feeling much better about his chances of fighting McGregor. Why’s that? 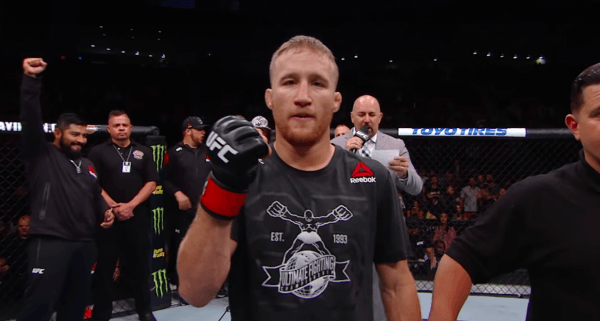 Gaethje explains why he thinks McGregor will face him now

Before McGregor was booked to fight Donald Cerrone at UFC 246 last weekend, Gaethje repeatedly argued that the star should have to fight him. The reason being that Gaethje took out Cerrone in September, and is ranked higher than “Cowboy”. So, if McGregor wants to fight for the lightweight title again, then, according to Gaethje (and others), that road should go through him. [2]

Well, although UFC President Dana White has said that Conor’s advanced to a title shot, on account of his latest win, Gaethje thinks he could end up facing the star. While speaking on the Punchlines Podcast [3], Gaethje had this to say about his title shot prospects, and the chances of fighting McGregor next (quotes via MMA Junkie [4]):

“I’m not necessarily being overlooked. I’m in the conversation,” Gaethje said. “I lost two times not that long ago, and unfortunately that set me back, and that allows these people to have an argument or a case when it comes to the argument or it comes to this circumstance.

“Ultimately that dude (McGregor) makes his own decisions, and I think he has more confidence now. He needed a win. Yeah, I think he’ll fight me now.”

Could Gaethje be right? Was it solely a matter of confidence and now McGregor will agree to fight him? It’s possible. Many others have argued that the UFC and McGregor’s camp pushed for a bout with Cerrone, since on paper, the match-up favored the star. Following McGregor’s loss to Khabib Nurmagomedov in 2018, another defeat would have been a massive setback for the Irish fighter and the UFC.

Further, before McGregor fought Cerrone, he did say that he might elect to fight Gaethje next. But, as it stands right now, it’s hard to imagine the UFC getting on board with McGregor – Gaethje next, unless Conor demands the match-up. Having McGregor fight for the 155 belt next, or bouts with either Jorge Masvidal or Nate Diaz would be bigger bouts.

During the podcast, Gaethje also weighed-in on McGregor’s win over Cerrone, which came at the 40 second mark. It marked the third straight time Cerrone has been stopped (although his loss to Tony Ferguson was via doctor stoppage). Here is some of what Gaethje had to say:

“I think it was an (expletive) move that he took it, and that’s just coming from a straight competitor because – he’s coming off of losses, too, and that’s his argument when you say hey you’re going to fight someone coming off losses, but he’s talking about title contender, title contention or title shots, and you can’t fight him (Cerrone).”

As noted above, Gaethje isn’t the only person to make this argument. Now the MMA world is waiting to see whether McGregor will indeed wait out, and face the winner of the April 18th fight between Nurmagomedov and Ferguson.