Cris “Cyborg” [1] officially started her Bellator chapter on Saturday night with a championship win, and after the pivotal victory, the star reflected on her previous issues with the UFC. 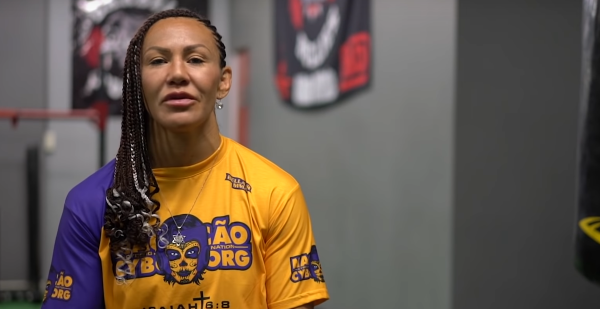 “Cyborg” says she felt like a “slave” in the UFC

The 34-year-old Brazilian star took on Julia Budd at Bellator 238, and “Cyborg” ended her reign as the featherweight champ with a vicious flurry of strikes in round four. [2]Bellator 238 went down at the Forum in Inglewood, California, which is also where “Cyborg’s” run as the UFC 145 champ was halted by Amanda Nunes. The latter quickly knocked “Cyborg” out at UFC 232, which turned out to be the legend’s second last bout with the promotion.

Well, following her big win on Saturday, “Cyborg” had this to say while talking about the fact it took place where her reign as the UFC champ ended (quotes via MMA Fighting) [3]:

“When I lost that title, I got out of the cage, I was not feeling sad,” “Cyborg” said. “I’m speaking real. I feel like something got off my back. I walk over there I did an interview, I know all the walls have the writings, I remembered every single part [of fighting at The Forum]. I did the interview, and I was not sad.

“When I came here and heard I was going to fight at The Forum, I said God is amazing,” Cyborg stated. “I lost my belt here, I [came] back here and fight, I got a title. I worked really hard for this fight. I always work hard and I feel happy to have the opportunity and make history. This is going to be the only fighter to get four titles.”

Now, if you’ve followed “Cyborg” over the years her comments about the UFC probably won’t come as a surprise. The star’s issues with UFC President Dana White and the promotion are now well documented. [4]

“Cyborg” reports she broke her nose in camp

Another interesting development to come out of “Cyborg’s” post-fight presser was that she broke her nose a couple of weeks out from the fight. She wore a protective mask for the remainder of her camp. Pretty remarkable.

With the win on Saturday, “Cyborg” moved her record to 22-2, with 1 no-contest. “Cyborg” has won titles now with Strikforce, Invicta FC, the UFC and Bellator.