It's only been a few days since Khabib Nurmagomedov vs. Tony Ferguson was made official. But, "El Cucuy" has already fired an array of verbal shots at the UFC's lightweight champ.

Khabib Nurmagomedov has repeatedly said that Tony Ferguson deserves to be the next man to challenge for the UFC’s lightweight crown. But, according to “El Cucuy”, he’s already in the head of the renowned fighter, as they get set to battle next April. 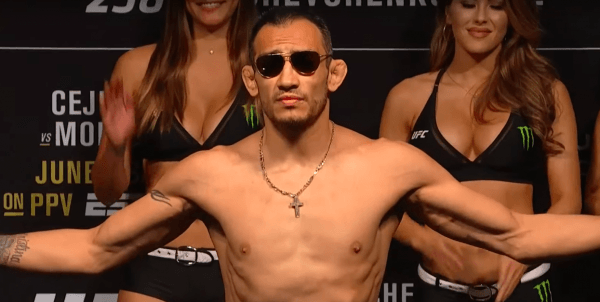 Recently it was reported that Ferguson and Nurmagomedov have both, signed bout agreements for an April 18th card in Brooklyn, New York. The confirmation has ended months of speculation as to when and if the lightweight stars will fight (and yes, knock on wood that this fifth booking doesn’t also get punted due to injuries etc).

Well, since then, Ferguson appeared on Ariel Helwani’s “MMA Show” on Monday. Not surprisingly, “El Cucuy” made several, interesting comments while discussing the highly anticipated bout (quotes via MMA Junkie):

“You’re going to have to ask the UFC (why the fight is in April),” Ferguson said. “Khabib is still on his world tour. He’s doing things, kissing babies and doing all that fun stuff. Who cares? You know who I am. You know I’m ready for February. I was ready to take another opponent if they were going to (expletive) pull some crazy stuff. But everything worked out. We’ve got until April. We’ve got plenty of time to train. We’ve got plenty of time to not get hurt, to be very smart and trust our teams and give the fans exactly what they (expletive) want.”

Is Ferguson in Nurmagomedov’s head?

Now, is Ferguson already in the head of the undefeated fighter? It’s possible. But, when you consider what Khabib has accomplished to date and that he’s dominated most of his opponents, chances are he feels pretty about about his chances against Tony. Even if the latter is one of the most dangerous and unorthodox fighters he’s faced to date.

Ferguson’s comments about the scrambles is particularly interesting, and others have also argued that this is where he could pose the most serious threats to Nurmagomedov (28-0). After all, “El Cucuy” has underrated wrestling, scary elbows and nasty, sneaky chokes.

The 35-year-old Ferguson (25-3) will be fighting for the first time since June, when he scored a TKO win over Donald Cerrone (via doctor stoppage).