The last time Washington D.C. celebrated a World Series championship was 22 years before President Trump [1] was even born. The Washington Senators won the 1924 World Series in seven games. And Nationals fans did not disappoint in their enthusiasm when they also won in seven. Some fans got downright buck wild!

Washington Nationals fans whoop it up

It took 95 years, but the Washington Nationals brought a World Series trophy to the nation’s capital once again. Over the last 15 years, the Nationals added themselves to a list of long-suffering fanbases, including the Boston Red Sox, Chicago White Sox, and Chicago Cubs.

Washington D.C.’s history with baseball is a bit more complicated. It was the Washington Senators from 1901 to 1960. Following the 1960 season, the team relocated and became the Minnesota Twins. Major League Baseball expanded, giving Washington D.C. a new Senators team. But that didn’t last as the team moved, becoming the Texas Rangers in 1971.

Major league baseball didn’t exist in the capital again until 2005 when the Montreal Expos relocated, becoming the Washington Nationals.

Entering the playoffs as a wildcard team, along with the Milwaukee Brewers, the odds weren’t necessarily in their favor. Taking the World Series all the way into Game 7, which is the pinnacle of baseball, the Nats won 6-2.

And when the time came, the players and fans, made sure not to hold back.

While the team was thousands of miles away in Houston, fans [2] packed Nationals Park, braving the rain to celebrate loudly.

Some fans went to different levels of extremes. Earlier in the series, Nats fans flashed the Astros pitcher in Game 5. 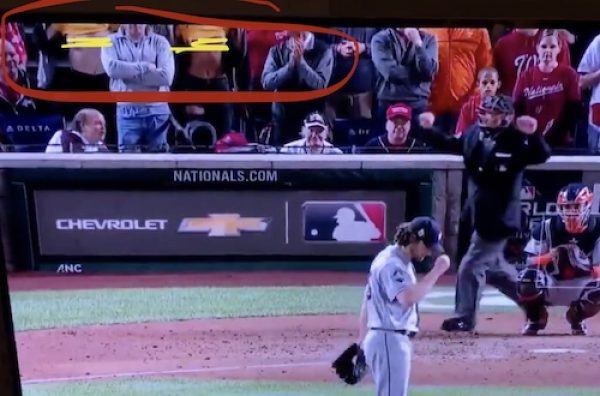 One of the more entertaining spectacles was the rather massive fan who stripped off his shirt and performed a slip-and-slide move on top of the third-base dugout.

A slip and slide worthy of the World Series pic.twitter.com/d55XYZuEtK [4]

Other fans lined the streets of D.C., climbing street signs and generally having a great time.

Back in Houston, inside the clubhouse, the Nationals celebrated with gusto. Players wore protective gear as beer and champagne bottles exploded. Everyone was soaked.

As champagne sprayed and flowed, music from Latino to hip-hop blared while the players danced around and hoisted the World Series trophy.

Naturally, the team also made sure to turn up, “We Are The Champions” by Queen.

Washington, D.C. sports fanatics are fresh off of a 2018 Stanley Cup win. The Washington Capitals have been highly supportive of their hometown MLB team, wearing Nationals t-shirts on their own game days and constantly tweeting their support.

Capitals hockey players set the bar high in 2018 with their celebrations and party antics all over downtown D.C. One particularly memorable moment was when Washington Capitals players, lead by captain Alexander Ovechkin, decided to splash around in the fountain at the MGM National Harbor.

No doubt we’ll continue seeing reports of raucous celebrations all around town for days to come.

Here’s another cool one to read: Bald Eagle Finds His Perch, Suprises Pitcher in Home Opener) [18]