UFC 245: so Mike Perry Says He’ll be a “Problem” For Colby Covington During Fight Week

Colby Covington will battle rival Kamaru Usman at UFC 245, but it sounds like "Chaos" could have some interesting exchanges with Mike Perry, if and when the two cross paths during fight week.

Colby Covington’s lead up to UFC 245 next month is almost certainly going to be intense, on account of his rivalry with Kamaru Usman. But, it also sounds like the controversial fighter will need to be on the look out for Mike Perry during fight week. 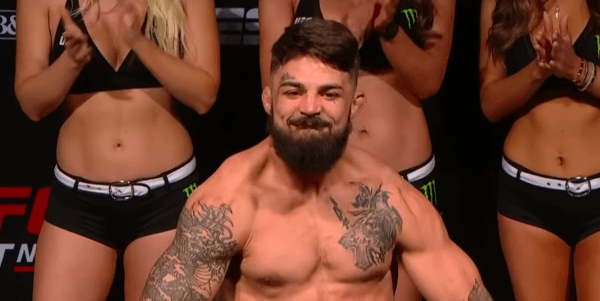 Perry is set to face Geoff Neal at the December 14th card, which will go down at the T-Mobile Arena in Las Vegas. As noted above, that’s the same night Covington will challenge the welterweight champ Usman.

The card will mark the first time Perry has fought, since he dropped a split decision to Vicente Luque in August, in what was a wildly entertaining and bloody bout.

Well, if you’ve followed Covington in recent years, you know that the welterweight’s made plenty of enemies via inflammatory and controversial comments he’s made. One of those is Perry, as Covington has publicly insulted “Platinum’s” wife.

Perry was recently a guest on Ariel Helwani’s “MMA Show“, and the hard-hitting welterweight delivered this warning to Covington (quotes via MMA Junkie):

“I’m going to give Covington a problem all week long,” Perry said. “Lets see if he’s thinking about the right things when he gets in the ring. I hope he hears about this, and if he catches sight of me, it’s on sight.”

“I won’t be looking for him – I’ll be looking to do my own thing – but if I catch a glimpse, you know, I might sneak over,” Perry said.

“Maybe he’s looking for clout because he can’t get none with that crotch-sniffing style.”

When you consider all the people Covington’s verbally trashed, chances are Perry and Usman won’t be the only people that have issues with “Chaos” at fight week. Hopefully, however, nothing gets too out of hand. The Usman – Covington bout is long overdue, and it would be a massive tragedy, if some sort of pre-fight incident punted the bout.

Here is the complete line-up to date for the upcoming, December 14th event (line-up via MMA Mania).