Recently Floyd Mayweather Jr. [1] reported that he’s planning to come out retirement in 2020, and while he did so, he dropped the names of both Dana White and the UFC. Well, a few days removed from that, not surprisingly really, it’s being reported that the undefeated boxer is targeting a fight with one of the UFC’s stars… 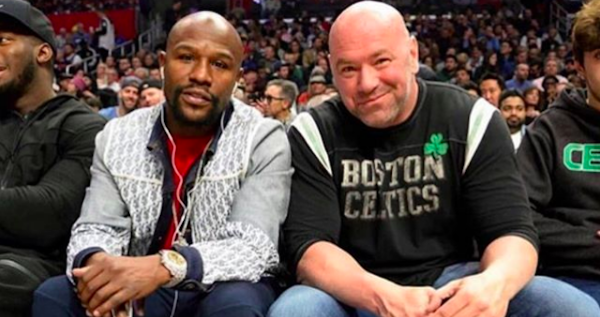 As noted above, recently the 42-year-old Mayweather Jr. attended a NBA game with the UFC boss man, White, and afterward, he made the following announcement:

@danawhite and I working together again to bring the world another spectacular event in 2020. #boxing #UFC #mma #mayweatherpromotions [4]

Mayweather hasn’t fought in an official bout (he took out Tenshin Nasukawa in an exhibition fight [5] last New Year’s Eve under the RIZIN banner) since he stopped Conor McGregor in 2016.

A crossover bout with a UFC star?

Well, Mayweather’s posts made headlines right away and prompted much speculation about who he might face. Since then, TMZ Sports [6] has reported that sources have informed the outlet Mayweather is looking at boxing Manny Pacquiao again (Mayweather beat Pacquiao via decision in 2015). In addition, the 50-0 fighter is apparently targeting a crossover bout with a UFC “star” who has top tier striking…

Now, this latter piece is somewhat surprising really. Yes, there will be some fans who are still interested in seeing Mayweather box a big, UFC name. But, chances are it will have nowhere near the same level of interest that his bout with McGregor had. Further, we just saw Mayweather Jr. beat Nasukawa, who is a ridiculously, talented kickboxer (although he was much smaller than Floyd).

In other words, it will be interesting to see if there’s a backlash from fans and boxing observers, if and when Mayweather tries proceeding with these plans (and here’s hoping).