Recently Nate Diaz prompted speculation about his fighting future via a social media post, but the outspoken fighter has clarified he's far from retired.

Since Nate Diaz recently told the fight game “peace out”, there’s been plenty of speculation and debate about if and when we’ll see the Stockton fighter competed again. But, now Diaz has confirmed that his fighting career is far from done. 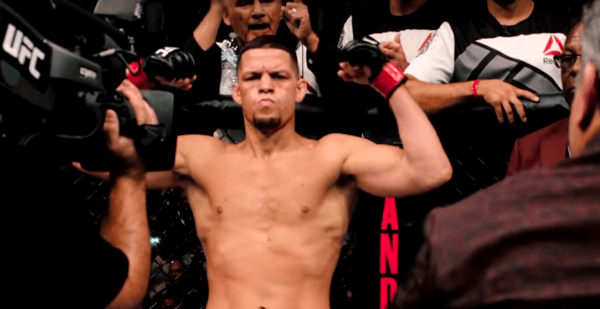 Diaz began calling for an immediate rematch right after his bout at  UFC 244 with Jorge Masvidal was stopped, as a result of a large cut Diaz had over his right eye. Although most believe Masvidal won the first three rounds of the bout, Diaz argued he was coming on in the third and that he would have gone on to win. As a result, Diaz called for a rematch with Masvidal, and the latter said he would sign-on. Dana White, however, distanced himself from booking the rematch right away.

Well, a few days ago, Diaz buzzed the MMA world by announcing that he’s given up on trying to get a rematch with Masvidal, and he proceeded to tell the fight game “peace out”.  Since Diaz had warned that if a rematch with Masvidal didn’t happen it could be several years before we see him fight again, speculation about his future began.

Well, more recently, ESPN’s Ariel Helwani got a hold of Diaz. In regards to whether the 34-year-old is hanging up the gloves, Diaz said this:

“Who said I was retired? I’ll fight tonight,” Diaz said.

So, this is good news, and it’s going to be interesting to see whether it means we’ll see Diaz back in the cage, sooner than most expected (assuming a rematch with Masvidal isn’t tabled next). The question is, who is Diaz interested in fighting, if Masvidal isn’t an option right now?

Diaz’s bout with Masvidal was just his second since 2016, when he lost his rematch to Conor McGregor via decision. This past August, Diaz returned to the Octagon at UFC 241 and worked his way to a decision win over Anthony Pettis.