As many people predicted would be the case, following Dominick Reyes’ [1] big win over Chris Weidman in October, it’s been confirmed he will indeed, fight Jon Jones [2] next. 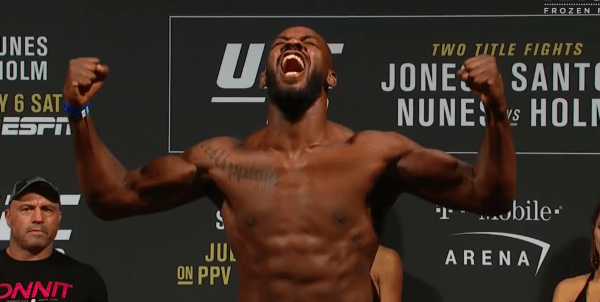 ESPN [3] is reporting that UFC President Dana White has informed the outlet that Reyes will challenge the light-heavyweight champ on February 8th. The UFC is expected to hold a card in Houston, Texas on that date; however, it’s not clear yet what event number it will be.

After Reyes (12-0) quickly took out Weidman at UFC Boston in October, the undefeated contender called for a bout with Jones (25-1). At first, Jones argued he didn’t have much to gain by fighting Reyes [4], and he also said he wasn’t excited about the prospect of facing “The Devastator”.

But, a little while later, Jones announced that he and his coaches had studied footage of both Corey Anderson and Reyes, and had determined the latter was a more dangerous opponent. More recently, Jones teased out that he would be fighting Reyes soon. [5]

So, when you consider everything that’s transpired more recently, this news shouldn’t come as a surprise. Jones will be fighting for the first time since UFC 239 in July, when he narrowly got by Thiago Santos via split decision.

Today’s news comes not long after it’s been reported that flyweight champ Valentina Shevchenko will take on Katlyn Chookagian at the February 8th card as well. So, the card will be a two-championship bout night.

Here is the line-up so far for the upcoming, Houston event.