Chris Weidman [1]hasn’t made any decisions yet, and he admits not having to cut to 185 pounds is “easier”, but we could see the former champ returning to the middleweight division. 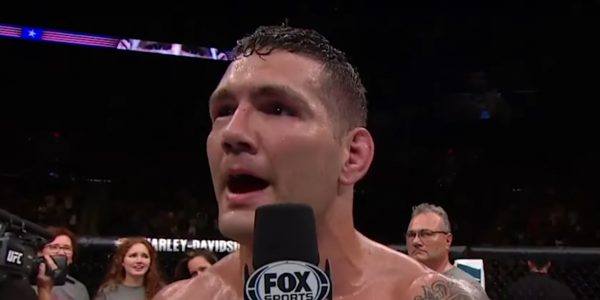 For quite some time, Weidman talked about moving up to light-heavyweight and earlier this year, he committed to the jump. As a result, the former middleweight king was booked to fight rising contender Dominick Reyes at UFC Boston in October [2].

Leading up to the contest, there was speculation that a win for Weidman, could deliver him a title shot. But, the decorated wrestler was taken out by Reyes in the opening round.

Recently Weidman appeared on Ariel Helwani’s “MMA Show” [3], and while discussing his future, the 35-year-old said this (quotes via MMA Junkie [4]):

Now, as noted above, Weidman hasn’t made a decision just yet. But it will be really interesting to see what he does here. If he can still make 185 in a healthy manner, then on paper, returning to middleweight could be the right move. Then again, he did lose four of his last five fights competing at that weight , and thus, made the jump to 205.

During the interview, Weidman also reported that he’s healthy and ready to fight again soon, despite being stopped in his last outing.

“In a perfect world – I mean, I’m healthy already – February, March, something like that,” Weidman said. “Yeah pretty quick. Listen, I know it sounds crazy: ‘You just got knocked out, what are you coming back quick for?’ But it wasn’t like I got knocked out cold. Literally, like, legs went out from underneath me, he was hitting me with shots, and I remember the whole thing. I had no concussion symptoms like I’ve had concussion symptoms over the years from some of my fights. And you know when your brain needs a rest. This time, it wasn’t that situation at all.”

Weidman also reported that he’s feeling “really good”, despite having undergone 23 surgeries over the years. The UFC has been filling out its spring schedule lately, so, perhaps we’ll see Weidman get booked for his next bout soon.

Weidman currently carries a record of 14-5.