Following his win at UFC Moscow Saturday, Alexander Volkov is pushing for bouts with Junior dos Santos or Alistair Overeem. But, Francis Ngannou has challend Volkov to throw hands.

Alexander Volkov returned to the win column yesterday by outscoring Greg Hardy, and afterward, he reported he wants to fight Junior dos Santos or Alistair Overeem next. But, another of the UFC’s top heavyweight contenders, Francis Ngannou, has thrown his name into the mix. 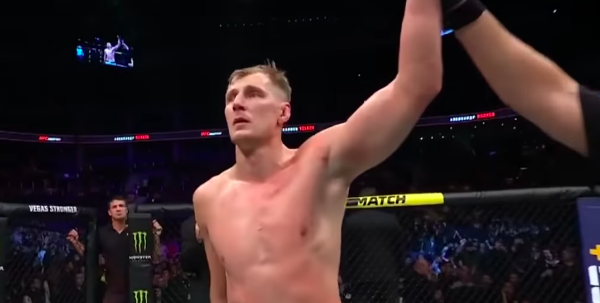 Volkov returns to the win column

Volkov took on Hardy in the co-headliner of UFC Moscow, and as many expected would be the case, he emerged with the victory. While Volkov was unable to stop Hardy, and he never appeared to have the latter in serious trouble, his kicks, jabs and range ruled the day. Volkov won the fight via a clear cut decision.

Volko was originally booked to fight dos Santos at the event, but recently JDS dropped out due to a bacterial infection in his leg.

After the fight, which marked the first time Volkov had fought since last October when he was stopped by Derrick Lewis, the Russian fighter said this (quotes via MMA Junkie):

“My first goal was to stop his way of fighting, because usually that’s what I do with my opponents,” Volkov said. “I make them to go with my game. It’s not that he wanted to stand there and bang with me, he had too. All I worked before the fight was to make him stand there and fight with me. I know there my class is much higher than his.”

“I returned to the title race,” Volkov said. “I want to be at the top. I will be the best. … I want as fast as possible. I have unfinished business with ‘JDS’ and Overeem. Both of them is good choice.”

Now, since Volkov was set to fight JDS, re-booking that fight does make sense. But, it’s not clear right now whether that will work timewise. Meanwhile, following UFC Moscow, Ngannou tweeted out this:

It will be interesting to see whether Volkov is down for this. From strictly a rankings’ perspective, a fight with Ngannou should be appealing, as a win would likely move the former Bellator champ into a title fight. After all, Ngannou is currently ranked #2. JDS is currently ranked #4 right now, and Overeem is #6.

As far as the “Reem”, he’s currently booked to fight Jairzinho Rozenstruik on December 7th at UFC Washington D.C. So, obviously Overeem has to get through that fight first.