During a panel discussion on Tuesday, Shaq stood up for GM Morey.

“We’re allowed to say what we want to say and we’re allowed to speak up about injustices and that’s just how it goes,” Shaq pointed out. “And, if people don’t understand that, that’s something that they have to deal with.”

Shaq on Daryl Morey/China "One of our best values here in America is free speech we're allowed to say what we want to say and we are allowed to speak out on injustices and that's just how it goes. and if people don't understand that that's something they have to deal with. pic.twitter.com/vefcHSPlMD [2]

“We as American people do a lot of business in China,” Shaq continued.

“And, they know and understand our values. We understand their values. And, one of our best values here in America is free speech.”

At least someone gets it. The NBA, with billions at stake, doesn’t seem to.

The NBA China controversy started when the Houston Rockets general manager tweeted his support for protesters in Hong Kong [4].

In a since-deleted tweet, alongside a black and white graphic, Morey tweeted “Fight for Freedom. Stand with Hong Kong.” 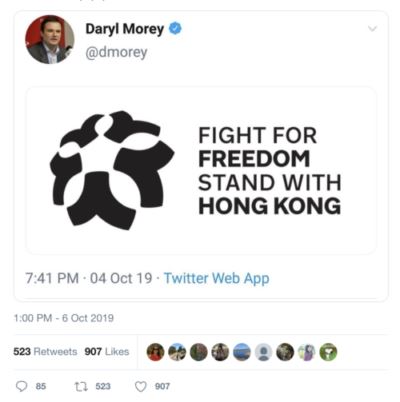 1/ I did not intend my tweet to cause any offense to Rockets fans and friends of mine in China. I was merely voicing one thought, based on one interpretation, of one complicated event. I have had a lot of opportunity since that tweet to hear and consider other perspectives.

While the NBA just rolled over and full on apologized in a statement issued on October 6th.

What’s worse, the NBA also started removing Americans at games in the U.S. who dared to show support for Morey and the pro-Democracy protesters in Hong Kong. Read The Story: 76ers Fans Kicked Out Of NBA Game For “Free Hong Kong” Support [6]

Shaq’s comments are a welcome contrast to other current and former basketball stars, LeBron James [7] and Charles Barkley.

“We all see what that did, not only did for our league but for all of us in America, for people in China as well,” James said about Morey’s tweet. “Sometimes you have to think through the things that you say that may cause harm not only for yourself but for the majority of people. I think that’s just a prime example of that.”

I mean, wow. I guess we know where The Round Mound’s priorities are as well.

And what does Barkley say to anyone pointing out the fact that LeBron is known for speaking out about injustices in the U.S.?

“Everybody don’t have to pick every battle to fight…we don’t get to tell him what to talk about.”

While that’s true, LeBron certainly makes a point to speak out about injustice…unless it hurts his bottom line.

Hopefully, with Shaq as an example, players in the NBA who feel like they have to keep quiet have someone speaking the truth.