After Max Holloway [1] lost to Conor McGregor [2] back in 2013, he eventually went on to establish himself as one of the best fighters in all of mixed-martial-arts. As a result, talk about the stars running it back has often made the rounds. But, while Holloway is still interested in facing McGregor again, recently the featherweight king had some interesting things to say about the former champ-champ. 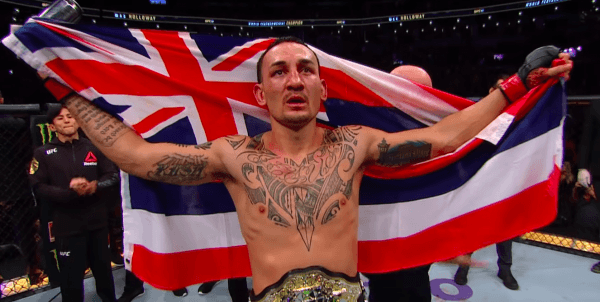 Speculation regarding McGregor’s next bout

Ever since McGregor was submitted by Khabib Nurmagomedov last October at UFC 229, speculation and debate about who the massive star will fight next has been rampant. But, as we approach the final quarter of 2019, McGregor’s return fight has yet to be booked.

In a recent interview McGregor did, in which he apologized for the now infamous, pub incident, [3] he expressed an interest in fighting several fighters. While McGregor has repeatedly said he wants to rematch Khabib, he’s also mentioned fighters like Tony Ferguson, Justin Gaethje and Frankie Edgar as possible opponents.

Well, in advance of Holloway’s December 14th fight with Alexander Volkanovski, he appeared on Ariel Helwani’s “MMA Show [4]” Monday. While talking about McGregor, and where he’s at now compared to several years back, Holloway said this (quote via MMA Junkie [5]):

“When Conor beat (Jose) Aldo in December 2015 and when he beat Eddie (Alvarez) in November 2016, for those 12 months, he ruled the world,” Holloway said. “The world. Not just the UFC, the world. And the one thing I can remember and take away from that time was his focus. He was so focused…”

“Listening to him now, I don’t see that same focus,” Holloway said. “If you’re going after everything, you’re not focused on anything. He called out like 20 guys in that interview.”

“I’m not interested in competing with him if he’s not at his best,” Holloway said. “And he doesn’t seem healthy, and he doesn’t sound right. If he comes back and he says, ‘Hey, I beat Max when he was a kid, but I want to beat him in his prime to prove that I’m the best ever,’ then yeah I want the champ. I want that champ. I want that 2015-2016 champ. That mentality and that focus, and right now it’s just not interesting to me.”

This is pretty compelling stuff. and it will be interesting to see if McGregor responds. It’s no secret McGregor has had his fair share of incidents in recent years. But, it’s also worth noting he’s had two children recently and he also oversaw the launch of his whiskey. So, from that perspective, it’s understandable if fighting wasn’t his primary focus.