Showtime Championship Boxing begins at 9 p.m. ET/6 p.m. PT and is headlined by unbeaten middleweight star Charlo making the second defense of his 160-pound title against Hogan, a tough former world title challenger who has campaigned from super welterweight through light heavyweight.

“Jermall Charlo is a can’t miss attraction and one of the brightest stars in boxing,” said Tom Brown, President of TGB Promotions. “He’ll look to make the second defense of his WBC Middleweight Championship in his fourth appearance at Barclays Center on December 7. He’ll have his hands full with the hard-charging Dennis Hogan, who many believe should be a 154-pound champion and should have earned the decision over junior middleweight champion Jaime Mungia. That performance has put him right back in a position to fight for a title and there’s no doubt that him and Jermall are going to leave it all in the ring and give fans a great fight live on SHOWTIME.” 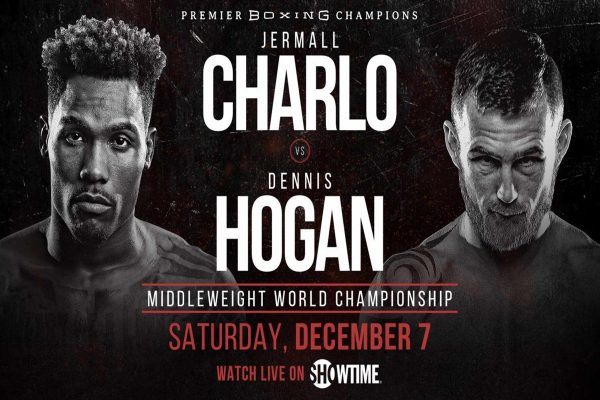 “Jermall Charlo is one of those rare athletes who creates a spectacle every time he steps in the ring, and December 7 will be no different,” said Stephen Espinoza, President, Sports & Event Programming, Showtime Networks Inc. “Jermall is the complete package – speed, power, athleticism and elite talent – so it is no surprise that he is one of the most avoided boxers in his division. Dennis Hogan deserves credit for stepping up to a challenge which many other middleweights wouldn’t. Hogan is a tough, aggressive fighter who many believe should already be a world champion. This is an intriguing clash of styles and personalities.”

“We’re looking forward to hosting another great night of Brooklyn Boxing and to welcoming Jermall Charlo back into our ring for the fourth time,” said Keith Sheldon, EVP of Programming and Development for BSE Global. “December’s matchup against Dennis Hogan exemplifies our ongoing commitment to bringing world class fights to Barclays Center featuring the sport’s most exciting stars.”

The undefeated Charlo (29-0, 21 KOs) is one of the most exciting young champions in the sport. He and his twin brother, Jermell, were super welterweight champions simultaneously between 2015-17 before Jermall decided to move up to middleweight. Charlo won the IBF junior middleweight title with a thrilling TKO victory over Cornelius Bundrage in 2015. He made three successful defenses, including a victory over current unified champion Julian Williams, before moving up to middleweight.

The 29-year-old has proven to be just as dominant at 160 pounds as he was at 154, with three convincing performances since moving up in weight. Charlo will be making his second defense of the WBC middleweight title and fighting for the fourth time at Barclays Center. In a homecoming defense in June on SHOWTIME, he successfully defended the title against Brandon Adams with a unanimous decision in his first bout since being elevated to full champion. In his last fight at Barclays Center he shared the card with his twin brother, Jermell, and came away with a hard-fought unanimous decision over tough veteran Matt Korobov last December.

“Nobody knows Dennis Hogan like I know Dennis Hogan,” said Charlo. “He likes to come straight forward with that ‘Mexican’ style. I’m going to exploit that. He’s a tough fighter and he deserves a shot at the world championship because he competed well at the championship level already.

“I’m going on two consecutive 12-rounders and I don’t feel good about that. I’m ready to get back to my thing, which is knocking them out and getting them out of there. This is a big fight for me because it’s my 30th fight and I’m about to turn 30.”

Hogan Returning To U.S. For First Time In Four Years

Hogan (28-2-1, 7 KOs) is coming off a razor-thin majority decision loss to Jaime Munguia in a super welterweight world championship match on April 13 in which many thought Hogan did enough to pull off the victory. The 34-year-old, who was born in Ireland and now lives in Queensland, Australia, is looking for a clear-cut victory over Charlo in his first U.S. fight since 2016. Hogan put together a six fight winning streak before the title fight against Munguia.

“I am excited for the opportunity to challenge for the most prestigious belt in boxing, the WBC middleweight world title against Jermall Charlo at Barclays Center,” said Hogan. “It doesn’t get any bigger than fighting in Brooklyn on Showtime against the undefeated middleweight champion. After the disappointment I faced in April in Mexico, having been cheated out of the WBO Junior Middleweight world title that I strongly feel I earned, I am extremely grateful to have another opportunity to become a world champion.

“As an Irishman, I feel right at home in New York and have no issue traveling abroad once again to achieve my dream. I have successfully competed at light heavyweight and middleweight as a professional and I will feel stronger with the extra six pounds on December 7. I’m thankful to Jermall and his team for working with my team to provide this opportunity. I will be prepared and ready to shine.”