If Justin Gaethje gets by Donald Cerrone this Saturday he says he'll have two options for his next bout, and it's hard to argue with the lightweight contender.

Justin Gaethje still has some work to do yet – namely, defeat the always tough and dangerous, Donald Cerone. But, the lightweight’s clearly got his mind made up, in terms of what he thinks should come next if he’s victorious at UFC Vancouver. 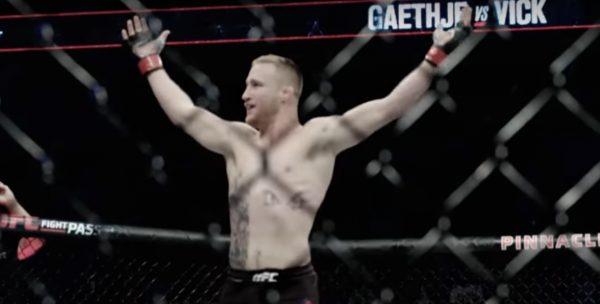 Gaethje and Cerrone have been booked to square off in the headliner of this Saturday’s card, which will be hosted by Vancouver’s Rogers Arena. The fight was set up following Gaethje’s back-to-back, KO wins over Edson Barboza and James Vick, and Cerrone’s TKO loss (via doctor stoppage) to Tony Ferguson.

As it stands right now, Gaethje is sitting in the #5 spot of the UFC’s lightweight ranks, and Cerrone is #4.

So, clearly there’s a lot riding on the line in this Saturday’s match-up, as the winner will remain in the title shot mix. While discussing what should come next recently with MMA Fighting, Gaethje said this:

“I think there’s two options for me — whoever wins [Khabib Nurmagomedov] against Tony [Ferguson] or I fight Conor [McGregor],” Gaethje said. “Those are the two options I’ll be looking at when I’m done.”

Yup. It’s hard to argue with Gaethje’s logic here. Nurmagomedov just defeated Dustin Poirier last weekend at UFC 242, who is currently ranked #2. McGregor is sitting in the #3 spot, but, since he’s also coming off a loss to Khabib, one could make the meritocratic argument Gaethje would be more deserving of a title shot.

Then of course, there’s the Gaethje – McGregor option. Recently McGregor reported that the UFC was looking at booking that match-up earlier this year, but that a hand injury to the former champ punted the match-up. While talking about that specifically, Gaethje had this to say:

“I’m trying to be the best in the world. He’s in the way,” Gaethje said about McGregor.

Anyone with any knowledge of MMA at all would love to see McGregor and Gaethje fight. Stylistically it has amazing potential, and Gaethje hasn’t been shy about verbally trashing the star as of late. The UFC could also use that match-up as a title shot eliminator, with the winner advancing to face whomever takes Nurmagomedov vs. Ferguson.