Jeremy Stephens spent some time training with Tony Ferguson, in preparation for his bout today, and "Lil' Heathen" had some interesting/hilarious comments about the "tremendous experience".

Jeremy Stephens will battle Yair Rodriguez today at UFC Mexico City, and he’ll do so, having spent some training with Tony Ferguson. If you follow “El Cucuy”, you won’t be surprised to hear Stephens is reporting that the experience was awesome/interesting. 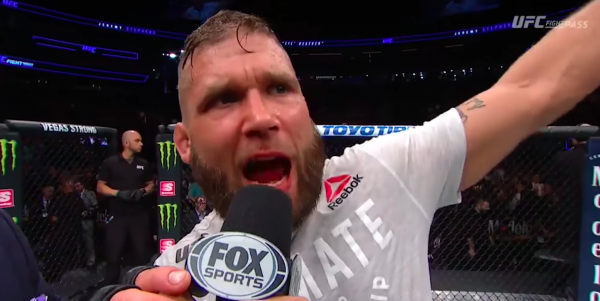 Stephens reflects on training with Ferguson

Stephens has been booked to fight Rodriguez today, following consecutive losses to Zabit Magomedsharipov and Jose Aldo. Prior to those defeats, “Lil’ Heathen’ had scored three straight wins, including a vicious KO of Josh Emmett.

Well, while speaking with the media this week, Stephens reported that Ferguson helped him get ready for today’s fight. While reflecting on his training with the former interim lightweight champ, Stephens said this (quotes via MMA Junkie):

“It’s like 1 in the morning, and I’m running up this hill, and he’s like, ‘Bro, I need you to sprint up this (expletive) hill, bro. Everything you’ve got.’ I’m like, ‘OK.’ I’m tired. I actually ran in the morning and then went and trained with him.”

“The boogeyman is screaming at me. Like, what the (expletive)?”

“Tremendous experience,” Stephens said. “I had a smile on my face the whole time I sprinted up that hill. He gave me the best compliment I think anybody could give me. He says, ‘Man, you’re in (expletive) phenomenal shape.’”

How about that? Having the ‘boogeyman’ chase you aside, it’s not surprising to hear that Ferguson is extremely driven when it comes to training and conditioning. It’s a rare sight to see Ferguson exhausted in the Octagon, despite the ridiculous pace he keeps and the volume he offers in strikes.

So, having “El Cucuy” praise your own conditioning has got to feel good. Now it will be interesting to see whether Stephens needs to tap into his extra gas tank against Yair today.

Here is the line-up for today’s card in Mexico City (via MMA Mania).