In advance of UFC 242, BT Sport shared out a promo video about Khabib Nurmagomedov [1] that even his detractors would likely concede is pretty cool. Well, since then, BT Sport interviewed the UFC’s lightweight champ, and showed him the aforementioned vid. 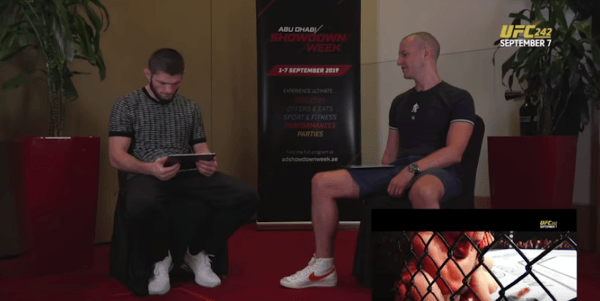 The promo video about Khabib

In advance of Khabib’s fight this Saturday at UFC 242 with Dustin Poirier, BT Sport released a must-see trailer about the galaxy class grappler. It focused on Nurmagomedov’s rise up the UFC ranks as well as his upbringing in Dagestan. It also covers Nurmagomedov’s massive bout with McGregor. You can check it out here. [2]

The champ sees the video for the first time

Well since the video was released, Khabib spoke with BT Sport’s Adam Catterall, and he showed him the trailer. You can watch his reaction, as well as the interview, below.

Here is the line-up for next Saturday’s, September 7th card in Abu Dhabi (via Bloody Elbow [3]).