Tony Ferguson Says he Knows How to “Break That Goat”, While Criticizing Khabib Nurmagomedov’s UFC 242 Win

Khabib Nurmagomedov may have controlled much of the action in his fight with Dustin Poirier, and submitted the rugged vet in round three. But, evidently, Tony Ferguson was not impressed with how the champ looked at UFC 242.

The consensus seems to be that Khabib Nurmagomedov demonstrated once again at UFC 242, why he is one of the greatest fighters ever. But, if you were impressed with the lightweight champ’s performance against Dustin Poirier, it looks like you and Tony Ferguson are in disagreement… 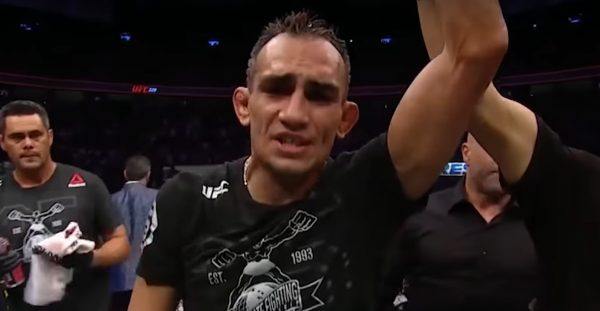 A few days out from UFC 242, talk about Poirier scoring an upset win over Khabib seemed to spike on social media. During the bout, the now former interim champ buzzed the masses with a flurry in round two, and a guillotine choke attempt in round three, but much of the fight was controlled by Nurmagomedov. The galaxy class grappler scored with seven of his eight takedown attempts, before wrapping up a fight-ending rear-naked-choke in the third frame.

Well, Ferguson was a guest on ESPN’s latest “MMA Show”, and of course, he was asked for his thoughts on Khabib’s performance. Here is what “El Cucuy” had to say (quotes via MMA Fighting):

“Lazy. One-dimensional,” Tony Ferguson said. “Nothing against him, both guys did awesome fight week. I know there was a lot of nerves and stuff. Khabib showed up, he obviously won. He put the pressure on Dustin and Dustin didn’t have an answer for it. Props to Khabib for winning but like I said, it’s lazy. We’ve prepared for this guy many times. He’s a good fighter but I know how to break that goat.”

“Well, being my type of fighter and my type of guy, you know I throw a lot of barrage of punches, kicks, knees and elbows,” Ferguson said. “So when I see someone pushing against the cage and not really doing too much, being active and just kind of putting themselves like a wet blanket. In jiu-jitsu, we use that saying. He’s a wet blanket, just sitting there. It’s a lot of pressure. When I fought Danny Castillo he did the same thing. It’s interesting how Khabib fights but to me it’s just boring, it’s lazy.”

Now, even Khabib boosters would likely concede that the win was pretty standard for the champ. He turned to his wrestling and top game to deliver him the win, and that’s what happened. If you’re not a fan of grappling, the fight probably didn’t score many points with you, and you could see some of this type of reaction via social media.

Of course, many would argue that the champ’s “one-dimensional” game is one of the most effective and dominant we’ve ever seen. The big question is, if and when Nurmagomedov and Ferguson fight, will the latter have answers others haven’t? Via his own wrestling skills, dangerous, active guard, and dynamic stand-up?

UFC 263: Big Moment In The Career Of Champ Israel Adesanya