Both Khabib Nurmagomedov [1] and Georges St-Pierre [2] pushed hard for a fight between the stars, before the latter eventually retired. Well, in a recent interview GSP did, the UFC’s former welterweight and middleweight champ expanded on why he and his team believe the fight never materialized. 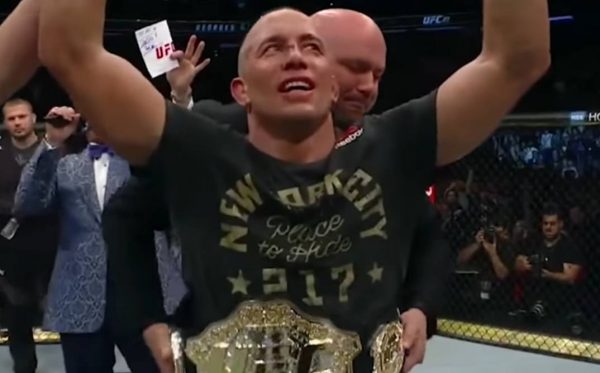 After St-Pierre made history in November, 2017, by choking out Michael Bisping to win the middleweight title, the legend vacated the belt due to his issues with ulcerative colitis. The Canadian star was initially non-commital about whether he would fight again, but eventually, GSP made it clear he wanted to fight Nurmagomedov. The undefeated, lightweight champ also reported that he wanted to face St-Pierre, but UFC President Dana White repeatedly shot down the proposed match-up. White said the fight couldn’t happen since St-Pierre didn’t intend to defend the lightweight title moving forward, and eventually, the GSP announced his retirement.

More recently, DAZN’s [3] Robin Black spoke with GSP, and of course, Khabib came up. While discussing why the all-star fight never happened, St-Pierre said this (quotes via MMA Junkie [4]):

“It makes sense in a way that my agent explained to me,” St-Pierre said. “Maybe (Nurmagomedov) represents a significant investment to the UFC. He’s reached a different type of clientele, maybe in the Middle East, and (has) the Muslim world idolizing him. He’s like an icon.

“Imagine that they invest a lot of money to promote a big fight between Khabib and I, and I win the fight? I’m out. I’m not interested in signing a fight with Khabib and guaranteeing that I want to go back and fight another contender. This fight for me didn’t need to be for a title, or it could have been at a catchweight. I would have been interested in doing it, but the UFC had other plans for Khabib.”

“…It sucks, but who knows? Maybe it’s a good thing,” he said. “The fighter is always the last person to think it’s time to retire, you know? Maybe I would have gone back and got my ass kicked by Khabib? I don’t think so. I’m confident and still believe I’m the best in the world if I prepare. But the reality is I’m getting older. I’m getting smarter. I’m at the time I don’t feel like physically I’m slowing down, but the fighter is the last person to know.”

Yes. It’s hard to argue that booking GSP – Nurmagomedov at 155 would pose some risks for the UFC. The fight would generate a ton of money – no question. But, if St-Pierre won the UFC would be left with a vacated 155 title soon after. It doesn’t sound like the 38-year-old “Rush” would continue to fight, and Nurmagomedov’s status would take a hit (assuming he gets by Dustin Poirier this weekend at UFC 242).

As it stands right now, Khabib is one of the UFC’s biggest commodities, and his undefeated record provides a compelling, promotional angle.

Now, what if the UFC did go with GSP – Khabib and the latter won? How massive of a star would Nurmagomedov be then?