Donald Cerrone's quest for a title shot took another big hit on Saturday, but "Cowboy" isn't giving up on his dream to secure a UFC title.

Donald Cerrone has dropped back-to-back bouts, and will turn 37 next March, but “Cowboy” is still gunning for a UFC title. 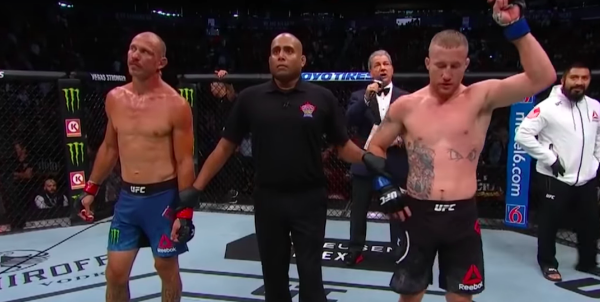 Justin Gaethje finishes Cerrone in the opening round

Cerrone took on fellow lightweight contender Justin Gaethje last night at UFC Vancouver, and the popular fighter was finished in the opening round. Gaethje dropped Cerrone late in the opening frame, and after landing a couple more punches, the bout was stopped. Cerrone protested the stoppage immediately after the fight was called, but the consensus seems to be it was the right call.

Cerrone began 2019 with a bang, as he took out rising lightweight Alex Hernandez in January, and in May, he outscored fellow contender Al Iaquinta. As a result, Cerrone was booked to fight former interim champ Tony Ferguson in September, but “Cowboy” lost that bout via TKO (via doctor stoppage).

So, what’s Cerrone’s plan moving forward? Following his second straight loss? After the card, the charismatic fighter said this (quotes via MMA Mania):

”I want fifty [wins]!” Cerrone said. “Fifty is the number I want, so I’ve got new for my coaches and corners: There’s going to be a lot more ups and downs and sidewaysies. When you’re winning, everyone wants to know, ‘What are you doing so special that you win?’ And then when you lose, everyone’s like, ‘What didn’t you do?’ Nothing, man. I trained hard. I trained my ass off. It just didn’t work out, so we’re going to go to the drawing board and we’re going to fix these things.”

”Like I said, I love this and I’m not going anywhere. This isn’t a fight where ‘Ah man, I’m thinking about retirement, guys.’ I’m gonna go home, I’m gonna … maybe work on head movement, something…”

“I’m going to get the belt, it’s going to happen,” Cerrone said. “I guess I just slid down the rung a little bit, but I’m going to come back, I’m gonna to train hard, and I’m going to get it. It’s the last thing I’ve got to do with my legacy. You can have the greatest legacy in the world but if I don’t have a belt it just falls a little short. So now, me, reflecting on everything, that’s one thing I want.”

Now, if you’re wondering, Cerrone currently has 36 wins on his record. So, clearly the rugged vet hopes to fight for a while yet if he wants to record 50 wins. Even with the ridiculously, busy schedule of fights Cerrone keeps, this would mean he’d need to fight for likely three, four more years (and win most, if not all of those fights).

And what about another title run? People have written Cerrone off as a contender before, and the dangerous fighter has also bounced back. But, with 37 on the horizon, it’s hard to deny that Cerrone’s championship window is closing.