If you’ve still been holding out hope for a third fight between Jon Jones and Daniel Cormier [1], it really looks like that’s not going to happen. Recently the former champ-champ Cormier reported he wants to fight Stipe Miocic one more time, and then call it quits on his storied career. 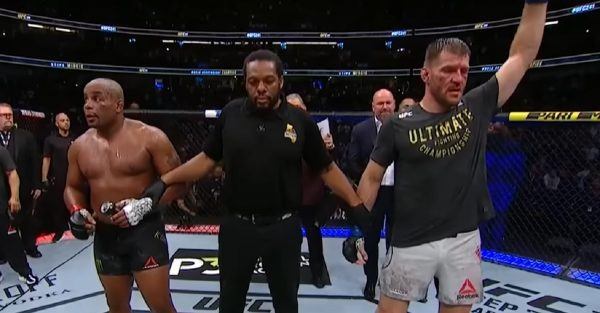 For a long time, Cormier insisted that he would not fight beyond his 40th birthday, which took place this past March. But, after Cormier was sidelined with a back injury, and as the MMA world waited to see if Brock Lesnar was going to return to face “DC”, he elected to postpone his retirement.

Ultimately, Lesnar opted against another UFC run and Cormier faced Miocic at UFC 241 last month. Miocic avenged his July, 2018 loss to Cormier by stopping the decorated wrestler in round four. After ward, Cormier relayed he was going to take some time to consider his future in fighting. [2]

A third fight with Miocic

Well, fast forward to today, and now we know the UFC is interested in booking a rubber match between Miocic and Cormier. Recently the latter spoke with ESPN’s Ariel Helwani, [3] and “DC” reported fighting Miocic one more time is the only match-up that interests him. Further, Cormier made it clear that a third bout with Miocic will be the last of his career (quotes via MMA Fighting [4]).

“I’m going to fight this guy again, and my intention is to fight him in the right way,” Cormier said. “Hopefully that’s enough to get my hand raised.

“But I’ll go fight him again, (and) win or lose, I’m not fighting again. This will be the only time I ever step foot in the Octagon again.”

“…A true heavyweight rivalry will carry a sport, and I think right now we have that with Stipe and I,” he said. “I intend to go back and get the job done and fight the way I train to fight.”

Now, could Cormier change his mind if he goes out and quickly puts away Miocic in a rubber match? And the UFC pushes for a third bout with Jones? It’s possible. Ya. But, at this juncture, with Cormier set to turn 41 in March, 2020, it seems unlikely. It’s not clear when Miocic – Cormier III might happen. But, even if it takes place in say, December, that would likely push one more fight to March, April, 2020.

Ending his career on a winning note, and with the UFC’s heavyweight title, would be a great way for Cormier to walk away.