Clash Of Champions 2019 Report Card: Grades Are In From Charlotte!

Clash of Champions is one of the few nights of the year where all WWE titles are on the line. Now, it is time to look back at each match and attach a grade.

Clash of Champions is one of the few nights of the year where all WWE titles are on the line. With so much gold being decided, we were bound to have new champions. Now, it is time to look back at each match and attach a grade. 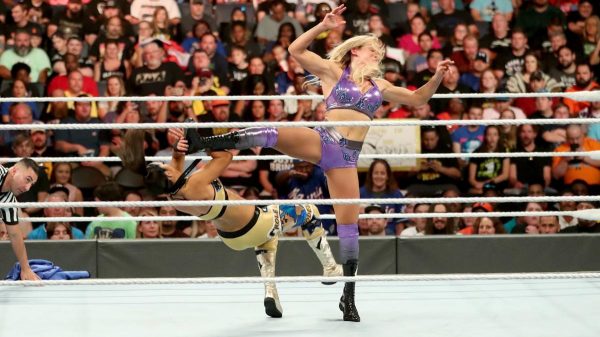 Before we get to the match, I have say that Bayley acts like a face; even though she had that awesome heel turn two weeks ago. The match saw Charlotte dominate the entire time, minus the final sequence. Fans saw Bayley use one dirty tactic to retain the title, yet she looked like a weak champion. Charlotte came off strong, while Bayley seemed like she was outclassed. Grade: B- 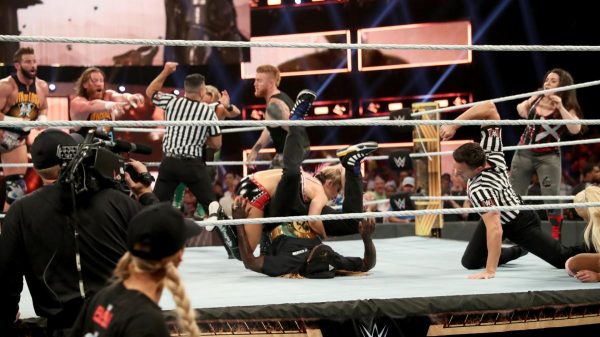 There is nothing wrong with Alexa Bliss and Mandy Rose being in a ring at the same time. The highlight of the match was R-Truth making his way down, only for Bliss to almost win the 24/7 Championship while defending her tag title. I still do not like Bliss and Nikki Cross as the champions. The belts need an actual team, which easily could be Rose and Sonya Deville. Grade: B- 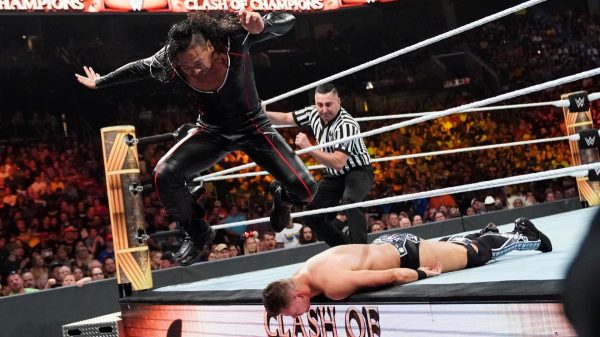 The Miz was chasing history as he looked for his ninth Intercontinental Championship reign. On the outside, we had Sami Zayn briefly calling the action and he actually made the match interesting. Ever since Shinsuke Nakamura joined the main roster, he has struggled to gain momentum. Hopefully, this short-lived feud is over or they add Sami into the action because at least he brings entertainment into the fold. Grade: B- 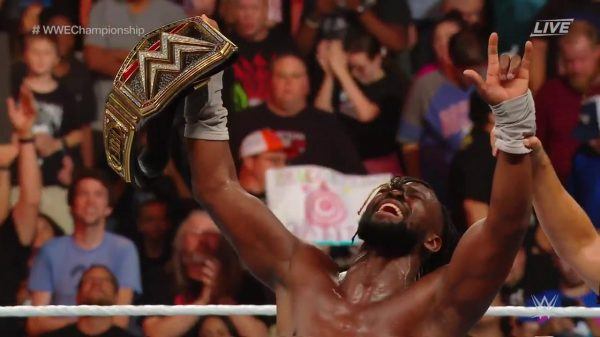 Heading into the match, it did not seem like WWE would have Kofi Kingston’s fairytale title reign end at the hands of a veteran like Randy Orton. Even though Kingston’s reign felt safe, there was a moment when I thought Orton had the victory. The storyline seems done and it is time as Kingston needs a new challenger. Grade: B 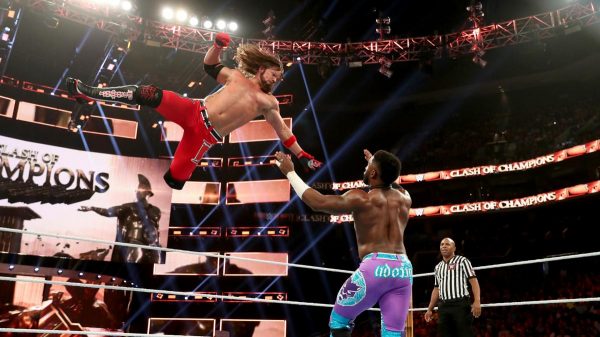 Looking at the card, WWE seemed to put their best match on the pre-show. I do not recall AJ Styles ever being placed so low on the card, but there could be a reason for all this. From the start, this was all Styles as he could have finished Cedric Alexander within two minutes. While the match was short, I did enjoy the spots. It will be interesting to see how Alexander is booked going forward as he basically jobbed to Styles; despite recently pinning him in the main event of Madison Square Garden. Grade: B+ 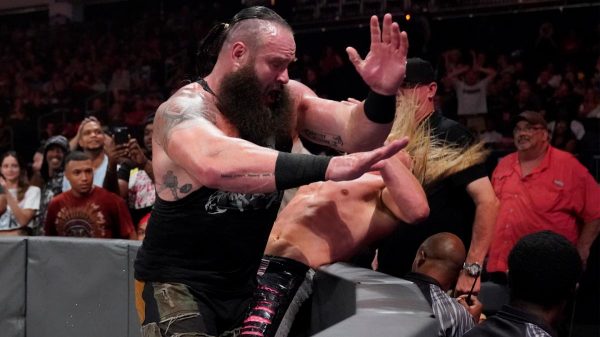 The big question heading into this match was if Seth Rollins or Braun Strowman would turn on their partner and if the odd pairing would leave still tag champions. It was inadvertent, but Strowman cost his team the titles. After the title loss, we should have seen Strowman and Rollins trade shots to help build their upcoming Universal Championship match. I am not sure why the match ended with neither doing something about the loss. Instead, all we got were Strowman and Rollins pointing the finger at each other. Grade: B

SmackDown Tag Team Championship: The New Day vs. The Revival 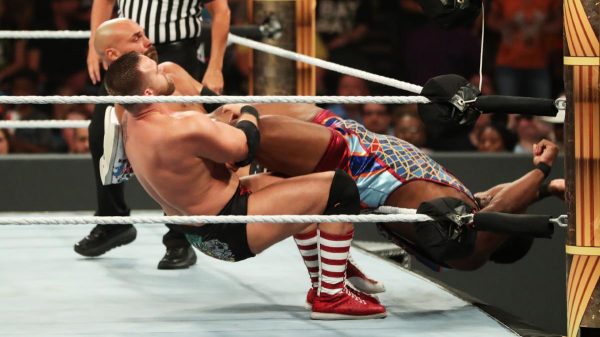 You never know what WWE has planned for The Revival. They are either the champions or a laughingstock of the division. On this evening, they are back towards the top as they made history. The Revival are the first duo to hold tag gold for NXT, RAW and SmackDown. New Day do not need the titles and they were not defending them, so the title change worked. Grade: B 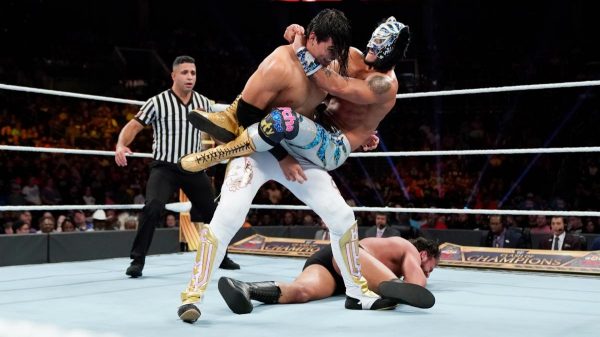 Honestly, I do not watch much 205 Live because there is too much wrestling and sometimes you have to skip content. After seeing these three superstars battle for the Cruiserweight Championship, it makes me wonder what other great action I am missing. The brand always delivers, which means their likely demise in the near future is even more of a bummer. I did take a point away for the finish, as Gulak did not have his shoulders up in the winning pin and the referee had to warn the champion. Grade: B+ 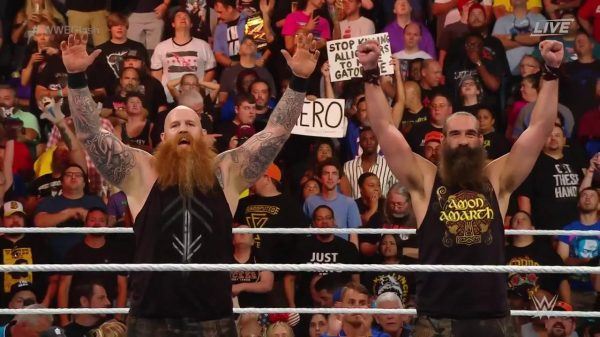 In all of Rowan’s career, he has never been pushed this high on the card. Outside of his recent promo, I am not sure if the bearded giant ever spoke more than a few words. The match needed to be No Disqualification for both men to slug it out. For months, Rowan attacked Roman Reigns and he held his own against WWE’s biggest star. The entire storyline has felt aimless, but the match was a brutal and fun affair to watch. Then Luke Harper, who seemed on his way out of WWE, entered the story. Big win for Rowan at Clash of Champions. Grade: A- 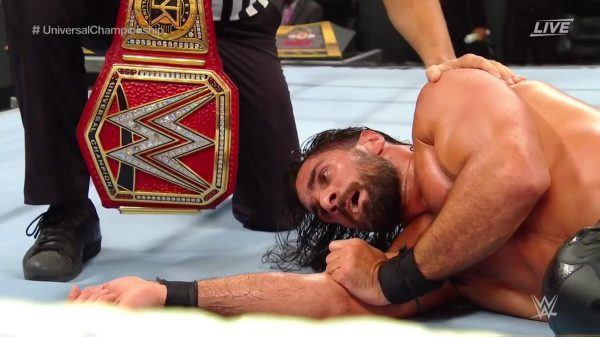 Despite these two being tag champions four hours earlier, there was little mention of that fact. The match sort of felt like SummerSlam’s main event, as Rollins battled a giant; this time in Braun Strowman. I have to say Strowman’s top rope splash was a sight to see. Four curb stomps and a pedigree was enough for Rollins to keep his belt. We all knew The Fiend was coming and he delivered. Grade: A- 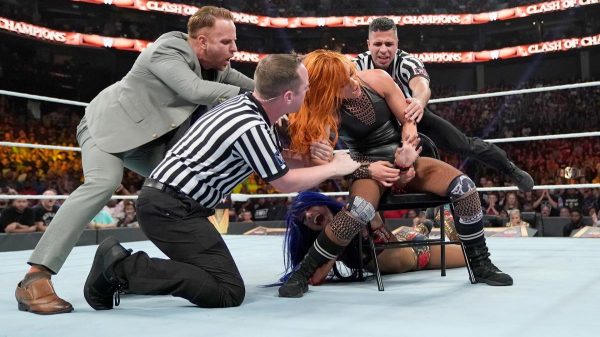 It is crazy to think where we were 18 months ago. Sasha Banks was a contender for the title and Becky Lynch was still seen as the bottom of the Four Horsewomen. Banks as a heel is what she was missing to get over in storylines. The match was going great and the brawl through the fans elevated everything. I am shocked we did not see Bayley get involved at this point. We may have gotten no pin or submission, but the fans were digging the match and these two will meet again. Maybe, inside Hell in a Cell. Grade: A-