After the headliner for Bellator 226 [1] ended in disappointing and unsatisfying faction, Ryan Bader [2] and “Rampage” Jackson exchanged words and nearly blows. 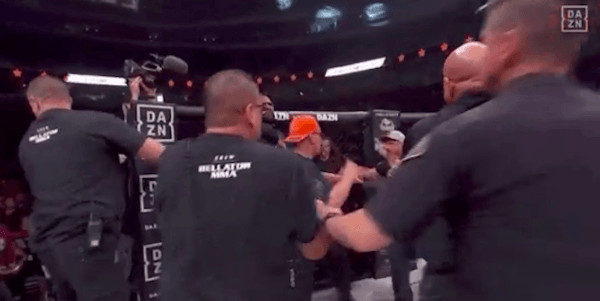 Bader took on Cheick Kongo in the main event, but the fight was called in round one and declared a no-contest, due to an accidental eye-poke the latter took (Bader isn’t convinced [3] an eye poke occurred). Jackson is a longtime friend and training partner of Kongo, and he proceeded to enter the cage after the fight was done. As you can see by watching the clip below, things nearly went off the rails from there.

After an eye poke that wasn’t really an eye poke ends the Main Event at #Bellator226 [4] , Ryan Bader has to be separated from Rampage Jackson.

Ah, Rampage. Remember when he was a thing? 😂pic.twitter.com/HStGEtTX5H [5]

Bader faced Jackson way back in 2012 at UFC 144 and outwrestled the star for the decision win. On Saturday, Bellator’s heavyweight and light-heavyweight champ was fighting for the first time since January, when Bader took out the legendary Fedor Emelianenko.

Jackson, meanwhile, hasn’t fought since last September, when he avenged his previous two losses to Wanderlei Silva by scoring a second-round stoppage.