We needed to take a deep breath before reporting this story to you today. There is a rumor going around that Vince McMahon is thinking of putting on The Undertaker Vs Sting [1] during the next Saudi Arabia pay-per-view. While I have nothing but respect for both veterans, the idea is absolutely ludicrous.

First things first, this is not a rumor that has been grasped out of thin air. The WWE have been hinting at a potential match between Sting and The Undertaker [4] on their social media page, which fueled rumors even more.

It is likely that the WWE is testing the water for this potential match, or simply looking to promote something they already planned in their matchbook. With The Undertaker having signed a lifetime contract [5], it might not be beyond the realm of possibilities.

It does not have to be said that fans are far from impressed with the potential match-up. Much like myself, fans have nothing but respect for the two veterans but do not see the point in putting on this match now. After all, both men are not in any condition to pull off a lengthy match. May I remind you of the Goldberg versus The Undertaker [6] fiasco? Would we like to see this match? Of course, but I think it is a little too late for that now.

Here are some of the most notable fan responses to the WWE tweet:

Could it hurt the legacy of Sting and The Undertaker? 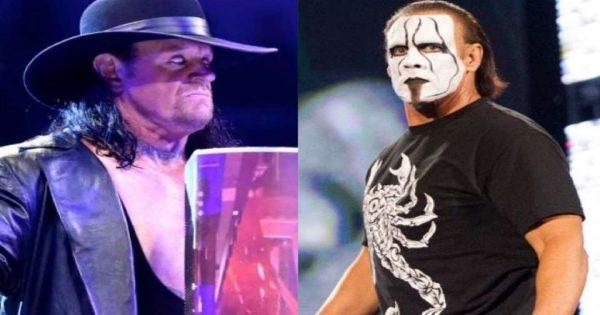 I have a number of issues with this match. I love The Undertaker [11] and I love Sting, that is not in question here. However, I am concerned that either Sting or Undertaker will get seriously injured during one of these matches. I like my nostalgia just like everybody else, but I do not want a man to encounter a life-threatening injury for it.

There is also the legacy of both wrestlers to think about. After all, both wrestlers are considered icons and a match such as this one scrapes at their immortal status. No matter how much you love a wrestler, there is no beating father time.

Over the years, The Undertaker has attempted to retire a number of times. While I am under no illusion that it is difficult for the man to let go of the business – which has pretty much been his life for more than three decades – it seems to be forced upon him at this point. I have no idea what is going on backstage, but surely you cannot expect Taker to do this many matches? I have no problems with him wrestling, but it should be against someone who can aid him in the ring. No offense to Sting, but he is not a young man anymore either. So, the chances of one of the men getting hurt due to fatigue are astronomically high.

If Vince is thinking of putting this match on, I beg him to reconsider. For the safety of both men, at least…