Stipe Miocic busted into an interesting dance routine, after he took out Daniel Cormier at UFC 241, and the champ's explained the inspiration for the moves.

Stipe Miocic understandably couldn’t contain his joy on Saturday, after he put away Daniel Cormier at UFC 241, and the champ broke into a pretty memorable dance routine. So what was the Ohio star’s inspiration? 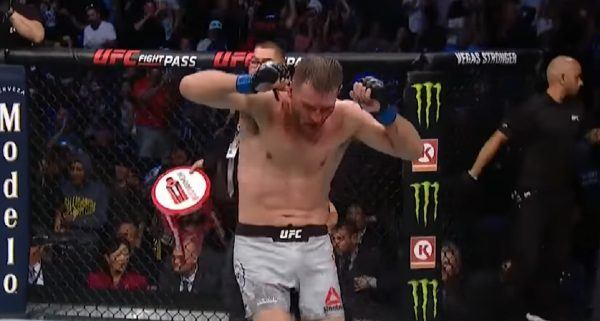 A come from behind win

Miocic landed his fair amount of shots in the first three rounds of the UFC 241 headliner. But the consensus is that Cormier was ahead either 3-0, or 2-1, when round four began. In that frame, however, Miocic started pounding Cormier to the body with left hooks, and then he finished the former champ-champ with a vicious flurry of punches.

After the fight was called, Miocic started dancing in the center of the Octagon, capping off what was one of the more memorable stoppages to a championship fight in recent memory.

Miocic reflects on the “dumb” celebration

Following the event, the now two-time champ was asked about the dance moves he showcased, and here’s what Miocic had to say (quotes via MMA Fighting):

“Has anybody seen ‘Old School’? We watched it today and I kind of ‘Frank the Tank’d’ it,” Miocic said. “I just had no idea what I was doing. I don’t know why I did it.

“I feel really dumb that I did it. Then I did the ‘suck it’ [crotch chop], I don’t know why. I feel like I didn’t know what to do with my hands or my feet. I’m an idiot, just dumb.”

“I think adrenaline takes over,” Miocic said. “I’m the guy at the party that does dumb stuff like ‘why would he do that?’ It’s fun.”

There you have it. Now, if you haven’t seen the 2003 ‘Old School‘ comedy, you have some homework to do. That aside, should Miocic feel “dumb” for what he did?

Well, when you consider how massive the win was, and that Miocic lost to Cormier last summer, it’s pretty understandable. Further, while things never got too nasty between Miocic and Cormier leading up to the rematch, it seemed pretty clear that Miocic had some issues with “DC”. The latter blasted Miocic for how he campaigned for an immediate rematch, and he also predicted the champ would be “done”, after their rematch.

All that said, the crotch chop might have been a bit too much no?

Now it will be interesting to see what comes next for either man. Could Miocic – Francis Ngannou 2 be around the corner (Miocic defeated Ngannou in January, 2018 by decision)? Or possibly a trilogy fight with Cormier? Will the latter retire?